NYWIFT’s annual Designing Women gala, honoring top hair stylists, makeup artists and costume designers, has been a star-studded highlight of the New York entertainment industry’s Spring calendar since its inception in 2000. As we prepare for the 2017 event on Tuesday, June 6th at NYU Law School, let’s take a look back at last year’s ceremony.

Actor Ray Liotta presented the award to Rose Chatterton, who is both his friend and hair stylist on the television series Shades of Blue. Some of her other credits include The Good Wife, The Knick, Factory Girl and It’s Complicated. A strong union advocate, Chatterton is also President of IATSE 798. As Liotta said, “I’ve never met anybody who is as knowledgeable about what they do.”

Anita Gibson received the award for makeup. Gibson’s work has been seen in HBO’s Confirmation, Madea’s Big Happy Family, Summer of Sam, Love & Basketball, and Maid in Manhattan. Actor Lela Loren, who works with Gibson on the Starz series Power, presented, noting that Gibson’s warmth and strength are the “glue that holds the cast together.”

The hilarious Will Arnett presented the award to costume designer Sarah Edwards, who has worked with Arnett in several films including When in Rome and Teenage Mutant Ninja Turtles. Edwards’ credits also include The Secret Life of Walter Mitty, Salt, Igby Goes Down and Michael Clayton. In her acceptance speech, she stressed the importance for established women to “give a younger woman a leg up if you can.” We couldn’t agree more.

Finally, the Variety Ensemble Award was given to the team from Showtime’s The Affair. Star Maura Tierney presented the award, remarking on the challenges of both portraying and designing four characters who take on as many as 16 total different personas due to the show’s unique viewpoints and timelines. Sometimes, the hair, makeup and costumes are integral in reminding the stars which versions of their characters they are playing on a given day. Department heads Diana Sikes (hair), Caroline Duncan (costumes) and Sheri Kornhaber (makeup) accepted the award on behalf of the team.

Designing Women is always a special event, as it celebrates the lifetime achievements of top women working behind-the-scenes, and features the kind words of the actors who work with them so closely. The presentation is followed by a cocktail reception where guests can mingle with the honorees among displays of their work, including iconic costumes. (This year you can expect to see Kate Winslet’s outfit from Eternal Sunshine of the Spotless Mind, Michelle Williams’ coat from Manchester by the Sea, outfits from Jessica Jones and more!) 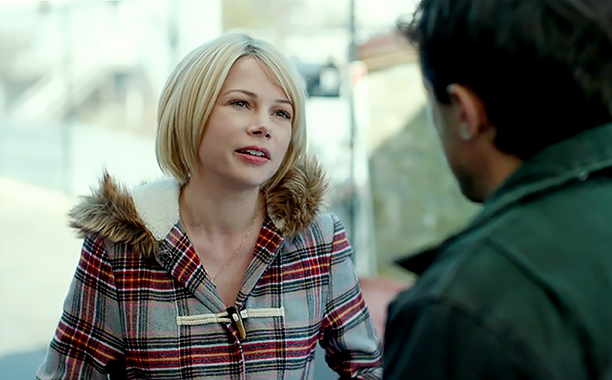 Michelle Williams in Manchester by the Sea, featuring costumes by Melissa Toth