Jennifer Reeder is an award-winning filmmaker who is best known for her short films, including Blood Below the Skin (2015), which debuted at the Berlin International Film Festival, and A Million Miles Away (2014), which was celebrated at the Sundance Film Festival. 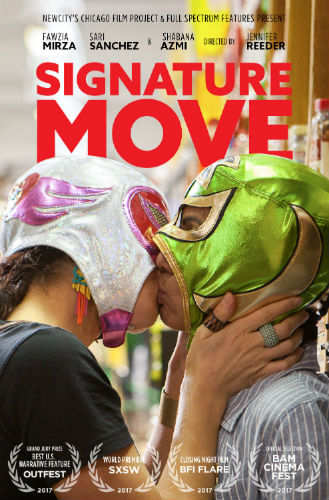 Reeder’s narrative feature debut film, Signature Move, premiered at 2017’s SXSW Film Festival, where it was nominated for “Gamechanger” award. It received the Grand Jury Award for “Outstanding American Narrative Feature” at L.A. Outfest, and Reeder took home the “Best Director Award” at FilmOut San Diego. The film was featured as “one of the 50 most anticipated American films of 2017” by Filmmaker Magazine.

This multi-cultural romance about life, love and lady Lucha-style wrestling is opening in NYC this Friday, October 13th. We caught up with Jennifer Reeder as she heads to Friday’s opening screening event to get her perspective on breaking down doors.

There are so many women involved in Signature Move. Was the making of this film affected by our current climate in the industry?

It’s something that I’ve been aware of for quite a while, in terms of casting or who I want to write a story about or who I want to put in front of my camera because that’s their story but also as a form of social justice. We made a commitment to have lots of women behind the camera. It wasn’t just me as a director. The first assistant director was a woman, there were two female producers, the art department was all women, the makeup department was all women, the camera department was women. The amazing Indian cinema legend Shabana Azmi, who plays ‘Parveen,’ made a point to say, ‘This set feels different with all of these women in front of and behind the camera.’

You’ve been outspoken about it being time for women to be given a full range of directing opportunities, including action movies, how do you feel the movie Wonder Woman affected these opportunities?

There was so much scrutiny on Patty Jenkins’ Wonder Woman but it held up under such a different kind of microscope than Guardians of the Galaxy or Captain America or any of these other superhero movies, and I love that it obliterated the box-office worldwide. If we continue to be vocal in demanding equality, studios are going to start giving female directors these jobs because they’ll be tired of getting so much shit about it. They’ll be like, ‘fine, find a woman to direct this film.’ They should be like, ‘Awesome, she’s a great director, let’s give her a chance on this,’ but if they’re simply responding to a backlash, that’s fine. I don’t care how the door opens, I’m just like, ‘open the fucking door.’

What do you bring to a story that is inherently different than a male director?

I am fascinated by how particular and precise our coping mechanisms are as humans. There are so many films that get it wrong, especially when it comes to how women respond to trauma. We’re so used to seeing a woman who turns into a raging bitch or is just crying all the time. In real life we do the most beautifully strange things, and trauma can be quite a small thing for some people or a catastrophe for others.
I have never made a film that is about masculinity, so I’m curious about that. I have three young sons so I’m surrounded by a lot of boy energy. I owe it to them to make a film that has a lot of that masculine energy, but also that comes from my perspective as a feminist filmmaker. With fire and explosions and car chases… Let’s do it!

Margarita Sophia Cortes serves on the executive board of NYWIFT as the Vice President of Communications. Follow her on @BKprgal and @MSophiaPR for more.