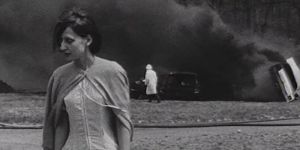 You Are Not I is based on a story by legendary writer, Paul Bowles and was the first film made based on one of his stories (Bernardo Bertolucci made Sheltering Sky ten years later). It is about a young woman who escapes from a psychiatric hospital during the chaos of a nearby multiple-car accident.

Made on 16MM in B&W for a minimal cost, this was Driver’s thesis MFA film at New York University. You Are Not I took almost two years to complete due to lack of finances and was a hand-made production. Driver directed and edited. Jim Jarmusch co-wrote the script and was the cinematographer. Other collaborators on the film include the writer Luc Sante (Lowlife, The Factory of Facts, Evidence, Kill All Your Darlings, etc.) who plays a small part. The photographer Nan Goldin also plays a role, as well as was being the film’s still photographer. The two leads were Suzanne Fletcher and Melody Schneider.

The film was thought to be destroyed but, to great acclaim, in 2010 a near pristine print was discovered in Bowles’s house in Tangiers.