The 91st Academy Award nominations were unveiled on January 22 by the Academy of Motion Picture Arts and Sciences. The Women’s Media Center’s (WMC) Investigation 2019 Report finds- again- that women are missing from among the non-acting Oscar nominations in the following categories: Directing, Cinematography, Editing, Original Score and Visual Effects. Only one woman was nominated in Best Animated Feature Film and the two writing categories. This means 75% of non-acting Oscar Nominees are men. Compared to last years Academy Award nominations, the total number of women nominees in non-acting categories were down for Best Picture, Best Director, Original Screenplay, Editing, Cinematography, Production Design, and Animated Feature. Categories of Adapted Screenplay, Documentary Short, Original Score, and Original Song remain changeless with no women non-acting nominations for the past two years. 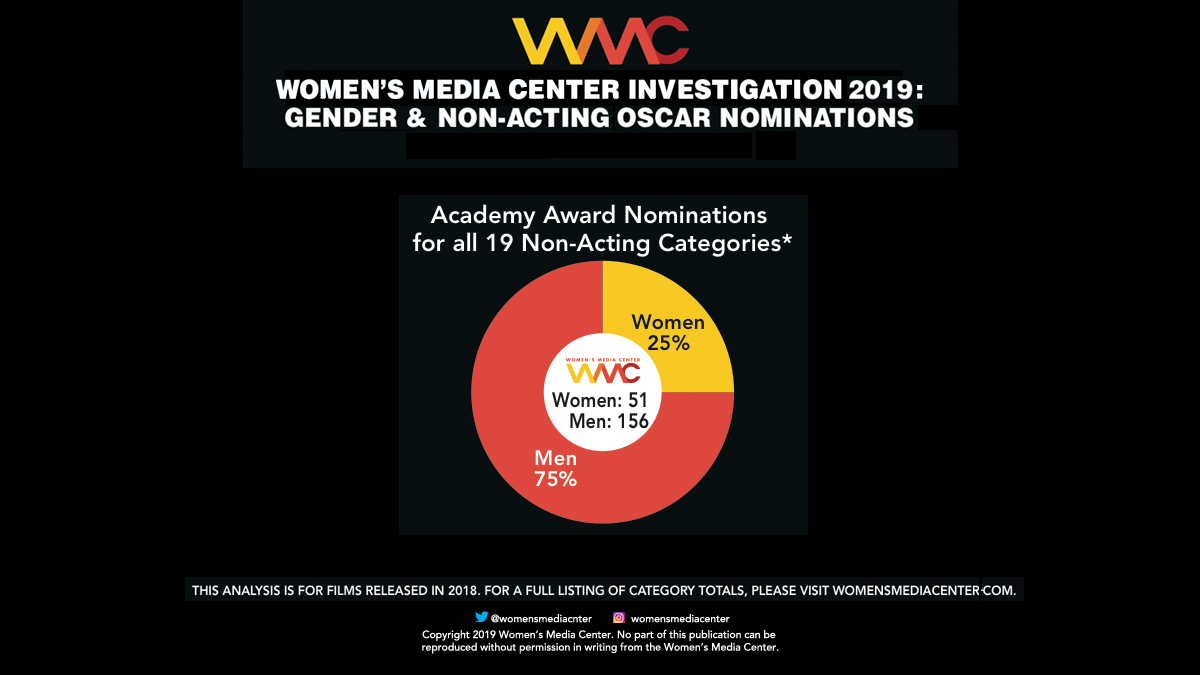 While industry-wide efforts to close the gender gap have gained traction, women are still a far ways from having equal representation in Oscar nominations. The overall percentage of female nominations in non-acting categories was marginally higher than last year – 25 percent compared to 23 percent, with the number of women nominees higher in the categories of Documentary Feature, Costume Design, Makeup and Hairstyling, Live Action Short and Animated Short.

Yet, when placed in the context of when women will start to see the effects of exponential growth in equal representation, change does not come soon enough. According to Julie Burton, president of the Women’s Media Center, “Again this year, women’s talent has not been recognized in many of the most powerful behind-the-scenes categories such as Directing, Cinematography, and Editing…Since the Women’s Media Center started counting the number of women nominated for non-acting Academy Awards as of 2006, the overall percentage of women nominees has increased from 18 to 25 percent. By that calculation, it will take another 50 years for women to be equally represented by the Academy. We need industry leaders to get on board and hire more women, especially women of color, in front of and behind the camera.”

Reports such as these demonstrate how despite the best intentions of social media campaigns such as #OscarsSoWhite and #OscarsSoMale, efforts from powerful actors and industry players like Frances McDormand to have “inclusion riders” written into their contracts and public promises to hire a percentage of women on projects like Regina King,   we have still a long way to go before we start to see gender equity, inclusivity and diversity in Oscar nominations.

What does it mean when women are left out of the equation? What is at stake when we do not see them represented, nor recognized by the film industry’s gatekeepers? Jane Fonda, co-founder of the Women’s Media Center, answers, “A nomination for an Academy Award can open doors,” She continues, “With three out of every four non-acting nominations going to men, women, again, are missing that stamp of approval.”

The winners of the 91t Academy Awards will be announced during the telecast on Sunday, February 24, on ABC.

You can download the full WMC report here. This report was reported and written by Sasha Stone with research from Tiffany Nguyen. The Oscar analysis was drawn using information from Oscars.org.