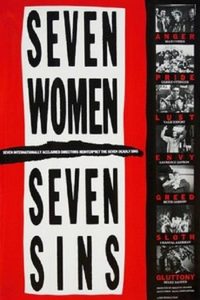 Seven Women, Seven Sins was commissioned by ZDF for an internationally renown series (Das Kleine Fernsespeil) that supported independent filmmakers as no other television did at the time. Americans who were not supported in the United States were given funding for films and their films were licensed for air when other broadcasters were not interested. They played experimental features, documentaries, and fiction features. Maxi Cohen (Joe and Maxi) and Bette Gordon (Variety, Empty Suitcases) were two of the filmmakers whose films played in this series.

The European women filmmakers that were invited to direct for the Seven Sins were amongst the most renown. After Fassbinder died, the Village Voice called Chantal Akerman “The greatest living filmmaker of our generation (J.Hoberman)”. When Seven Women Seven Sins was released in theaters, people would line up around the block and the film would sell out because people wanted to view Chantal’s latest work. Unlike the Americans, the European filmmakers had the good fortune of hefty government funding (up to more than a million) and they were producing a feature a year. Helke Sander (The Germans and their Men) had made an important and impressive film about the Berlin Wall. Valie Export (Invisible Adversaries) was known as an experimental film and video maker and Ulrike Ottinger (Johanna D’Arc of Mongolia) was a major German filmmaker of the avant guard and the fantastic.

Each filmmaker had the liberty of choosing to interpret a sin as they wished and the final film reflected this diversity, including traditional narrative fiction, experimental video, a musical, a radical documentary, delivered in multiple formats from 16, super 16, video and 35mm.

The film aired on German television and Cohen went on to prepare it for a theatrical release, unifying the formats into 16mm. The film premiered at the Montreal Festival du Noveau Cinema and Cohen’s film, which was not nominated in the short film category, won the short film prize at the festival for Anger. Seven Women, Seven Sins went on to win many other international first prize festival awards and according to the producers in Germany formed a cult following, for no one had seen a documentary like this before and they were quite appalled.

The film represents a quintessential moment in filmography for the 1980s as it includes iconoclastic filmmakers that made an impression internationally.