On the Road with David Amram 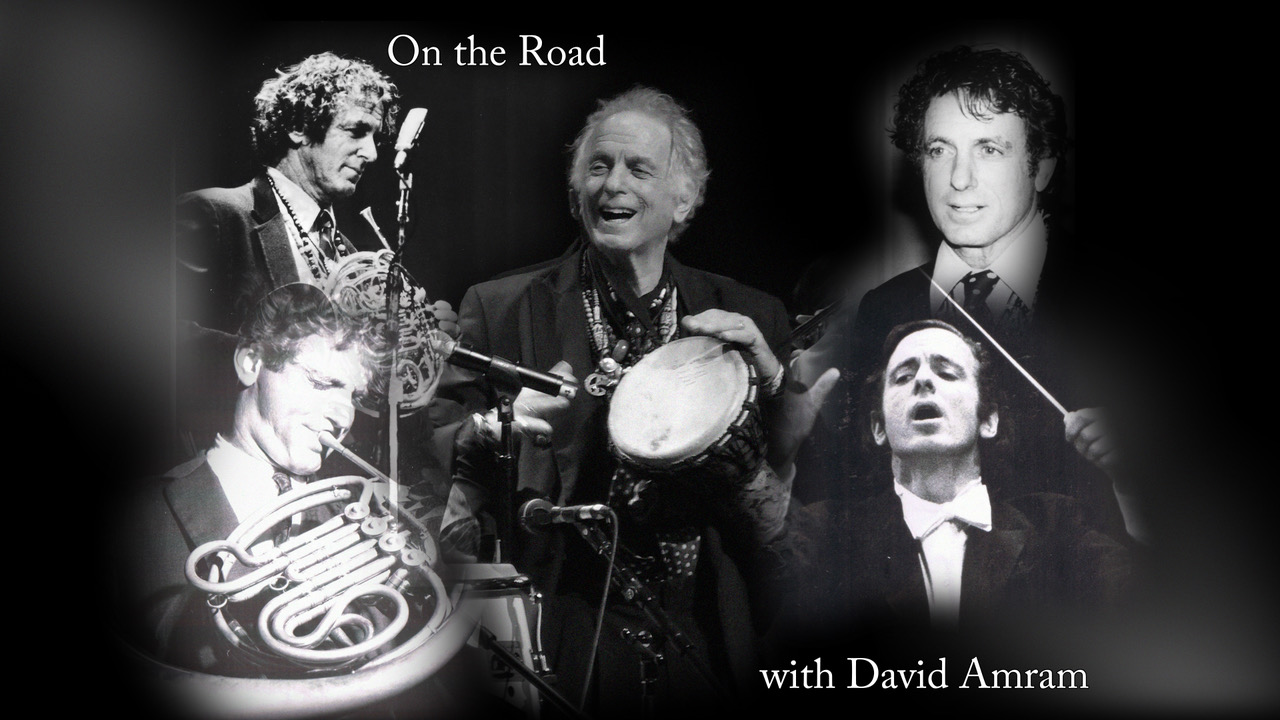 “On the Road with David Amram” is a documentary film about Jewish-American composer, conductor and multi-instrumentalist David Amram, for whom the adjective “eclectic” is entirely fitting. Among Amram’s collaborators over the last six decades are Leonard Bernstein, (who selected David as the first Composer In Residence at Lincoln Center in 1966). Other collaborators include writer Jack Kerouac, playwright Arthur Miller, poet Allen Ginsberg, writer/poet Langston Hughes, jazz legends Charlie Parker, Dizzy Gillespie, Oscar Pettiford and Charles Mingus, film directors Elia Kazan and John Frankenheimer, plus Folk legends Pete Seeger and Woody Guthrie. At the age of 88, octogenarian David Amram continues to perform the world over and shows no signs of slowing down.

Our film examines Amram’s amazing career. David Werner Amram III was born November 17, 1930 in Philadelphia. He began piano lessons at the age of seven, and experimented with trumpet and tuba before settling on the French horn as his principal instrument, eventually becoming a pioneer of jazz French horn, playing in the legendary jazz bands of Charles Mingus, Dizzy Gillespie and Lionel Hampton. In 1955, David was scheduled to play on the next Charlie Parker record date before Charlie Parker’s untimely death at age 34.

Our film will take the viewer from Amram’s classical roots through his friendship with Jack Kerouac and the Beats, and will continue to the present day. In 1957, Amram and Kerouac created and performed in the first-ever Jazz/Poetry readings in New York City. From there to David’s stint in Hollywood, composing the scores for the classic films “The Manchurian Candidate” and “Splendor in the Grass,” only a part of his long collaboration with Elia Kazan that began on the stages of New York. As composer and Music Director for the Lincoln Center Theatre, David wrote the score for Arthur Miller’s plays “After The Fall” (1964) and “Incident at Vichy” (1966). He also composed the scores for Joseph Papp’s Shakespeare In The Park from 1956 to 1967 where he premiered his comic opera “12th Night” with Papp’s libretto in 1968. Amram also wrote a second opera, “The Final Ingredient, An Opera of the Holocaust,” for ABC television in 1965.

We have followed David from his frequent performances at the now-shuttered Cornelia Street Cafe, where he had continued the tradition of jazz poetry readings, featuring guest stars from stage and television; to his yearly trip to Farm Aid; to the Woody Fest each year in Woody Guthrie’s hometown of Okemah, Oklahoma; to Havana, Cuba in 2018, where, after 41 years, he returned to play in the Havana Jazz Festival after having been sent by President Jimmy Carter in 1977 on a goodwill mission to perform along with musical luminaries Dizzy Gillespie, Stan Getz and Earl “Fatha” Hines. Both his life and his career have been truly amazing.

We are seeking funds to complete interviews with other high-profile Amram colleagues and collaborators such as Wynton Marsalis; Bob Dylan; TS Monk; Patti Smith; Paquito D’Rivera; Bobby Sanabria: Arturo Sandoval and Raffi, (whose song, “Peanut Butter Sandwich” famously mentions David), and Barbara Kopple, for whom David composed the music for her most recent documentary. Funds will also be used to begin post-production.

Filmmakers Michael Patrick Kelly and Suzanne Hayes have a proven track record of completing documentary films such as “Operation Lysistrata,” a documentary of The Lysistrata Project, the first “worldwide theatrical event for peace; “Behind The Wall,” a film told from the perspective of people living on both sides of the Berlin Wall before, during and after its lifetime; and “Motian In Motion,” a film that documents the extraordinary career of iconic jazz drummer Paul Motian.”