On December 6, 2017 the NYC Human Rights Commission held its first public hearing on sexual harassment in in over 40 years. Building on the foundation of the City’s historic “women and workplace” hearings of the 1970s which catalyzed a national movement to recognize and address sexual harassment in the workplace, New Yorkers from a variety of industries testified on their experiences of sexual harassment and challenges in reporting it.

The Commission issued a report in 2018 with policy recommendations and findings on how the City can better address sexual harassment in the workplace.

NYWIFT’s President at the time, Simone Pero, testified about sexual harassment in the entertainment industry. Her full testimony is below: 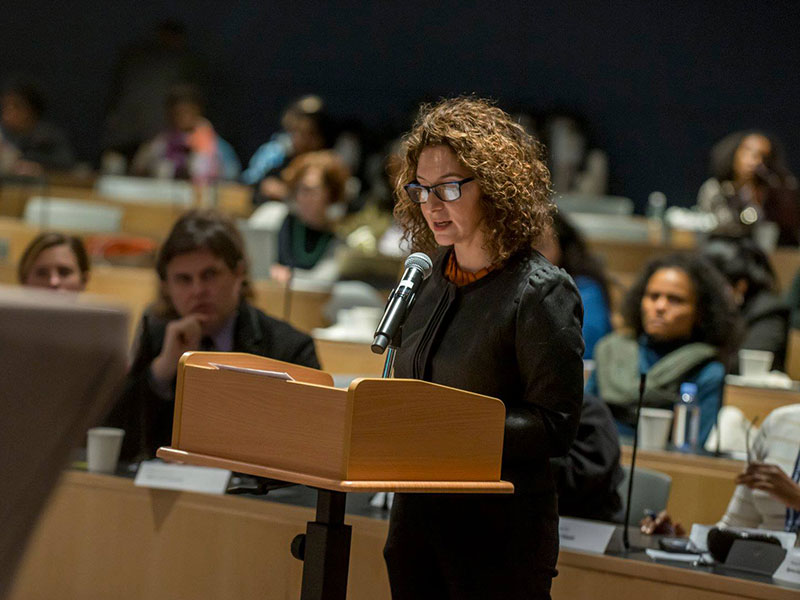 Good evening Commissioner Malalis and members of the New York City Commission on Human Rights. I am Simone Pero, President of the Board of Directors of New York Women in Film & Television (NYWIFT) and a long-time professional in New York’s media and entertainment industry. On behalf of NYWIFT, we thank you for convening today’s hearing and appreciate this opportunity to offer testimony on the topic of sexual harassment in the workplace.

NYWIFT is the preeminent entertainment industry association for women in New York advocating for equality in the moving image industry and supports women in every stage of their careers. With more than 2,200 members, both women and men, our work focuses on recognizing women’s achievements, presenting professional development and networking programs, and awarding grants and scholarships. NYWIFT is part of a network of 50 Women in Film chapters worldwide, representing more than 10,000 members. We have been making a positive impact on women’s careers for 40 years and our work is now more critical than ever.

Although we’ve been recently shaken by numerous high profile public declarations of sexual harassment incidents, to NYWIFT, and to so many of our members, this type of abusive behavior, while appalling, is anything but “breaking news.” Such stories of gender-based sexism and harassment have been pervasive and occurring for decades in our industry, no matter our job type or position.

For us, sexual harassment is ubiquitous. It happens on film and television location sets, in edit suites and screening cinemas, at client meetings, in corporate board rooms, at trade conventions, business social events, and in office settings. It can range from a subtle unwelcome overture to the most overt offense. Add in the fact that working in media and entertainment typically brings long hours and weekends and spending extensive amounts of time with co-workers and crew in sometimes casual and close settings. Plus, our business by its nature is people-facing, highly collaborative, and largely based on interpersonal relationships and power dynamics. It is also highly sought-after employment where competition is high for a limited amount of jobs.

While this industry backdrop may be distinctive, the challenges and concerns around the culture and reporting system of sexual harassment is not. Many times if an inappropriate or abusive behavioral incident occurs, there is a long-standing culture of silence and an unsupportive reporting system that significantly deters women from coming forward. Fear of retribution from managers and peers, the loss of job opportunities, and stymied career advancement are powerful deterrents. In addition, women’s pay inequality has also led to a culture of women being treated differently on the job, undervalued, and then often sexualized, making harassment a vicious part of the cycle.

Therefore, in response to the recent wide exposure of reported sexual harassment in our industry, today, we submit for your consideration, three action steps to lead systemic and cultural change and to secure our rights to work in a hostile-free environment.

First, acknowledging that a large portion of the production-related workforce throughout the New York Tri-State area are employed as freelancers is imperative. These freelancers often work for small to mid-size productions and non-corporate work environments. Therefore, we advocate for the development of the fundamentals, written standard operating procedures around sexual harassment that covers all types of crew and staff. These SOPs would include an effective reporting structure, an investigative body, and an improved enforcement system. We also propose the creation of a toolkit consisting of education and treatment resources and an on-set sexual harassment policy posting with a resource phone number.

Second, we propose mandatory sexual harassment training for all managers. This prevention and reporting-focused training would be empathetic to those disclosing and take into account psychological, cultural and social factors that play a very large role in the prevalence of sexual harassment. It would facilitate open lines of proactive communication among employees and the training designed to be interactive, relevant, and tangible to the experience of working in film and television.

Third, we propose the creation of a large scale City-wide public service announcement campaign that provides a resource, educates, and raises widespread awareness on the issue. As one of the most prominent public voices and advocates for women in New York, NYWIFT would welcome the opportunity to work with the City on the creation and production of PSAs utilizing our vast talent pool of women writers, directors, producers, cinematographers, editors, designers, PA’s and so on.

Additionally, we recommend the creation of a task force to expand our strategies and solutions around sexual harassment, representing a diverse mix of women and men from all media and entertainment-related organizations and companies across the city, perhaps as part of a committee within a larger state and municipal organization.

In closing, although sexual harassment and discrimination have been a problem from time immemorial, and there is rightful outrage at the present moment, a seismic shift is occurring on how women — all women — are perceived and treated in our workplaces. Our approach at NYWIFT is to promote dialogue, provide tools and knowledge, and to foster compassionate, inclusive solutions. As responsible citizens of New York and representatives of the most influential industry in our culture, we look forward to working with the City of New York and this Commission to up-level the discussion with an open and holistic approach to expand our solutions. We welcome the opportunity to join our collective understanding and resources to ensure that all women in media and entertainment work in healthy, equitable and safe environments.