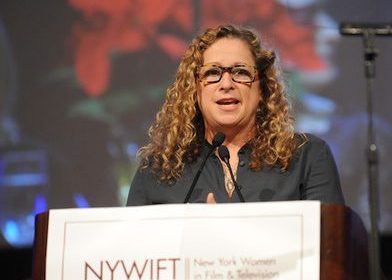 Humor infused the event, but heartfelt speeches on inequality in Hollywood, the generational shift in feminism, and the power of women to create change were the main focus of the day.

Maggie Gyllenhaal, who earlier that day was honored with a Golden Globe nomination, discussed the challenges of feminism and women’s attempts to “have it all.”

Loreen Arbus introduced Abigail Disney by sharing the motivation behind the Changemaker Award: “Our greatest hope was that by honoring those who have made a real difference in women’s lives, we could inspire others to take action.” In her acceptance speech. Disney explained that she came to filmmaking late, when she was 46, originally snubbing documentary filmmaking, considering it a wasteful use of money and “just art.” “What an asshole!” Disney exclaimed, causing laughter to erupt from the audience.

Honoree Mary Bailey knocked the belief that script supervisors are “office workers who have wandered onto the set and now perform secretarial duties,” and emphasized that the future of this position needs to be viewed as not a tech-savvy position only, but as the key person in charge of making sure the editing room has everything they need to make a film. She joked that Richard Pryor once told her she was the only “sane person on set.”

Our good friends at Hello World Communications edited the video of the event: