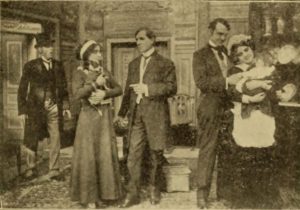 Mixed Pets is an early Alice Guy Blaché comedy about misunderstandings that arise when a new husband refuses to buy his new wife a dog and the couples’ domestic help conceal the fact they are married with a baby. Puppies and babies become mixed up in cabinets as everyone tries to hide their adored ‘pets.’ The film is enormously funny and shows a poignant understanding of people’s joys and foibles as well as a perceptive grasp of relationships, a Guy Blaché trademark.

Guy Blaché’s story is unique in the history of moving images. She was at the forefront of the international, technological, industrial and cultural changes that defined cinema as a new popular form. Starting as a secretary for Gaumont in Paris and moving up the ladder by working in the office by day and filming at night, Guy Blaché fully participated in all aspects of the evolving motion picture business – from early sound technology to feature filmmaking, to production and distribution, assuming a range of roles and adapting to rapidly changing developments and challenges. Her most celebrated achievement is as the first woman film director (her narrative film, The Cabbage Fairy, was released only months after the Lumières’ 1895 film, The Gardener, which is now credited as the first narrative film ever), yet this honor only scratches the surface of what she actually accomplished.

Mixed Pets is the earliest known extant U.S. production directed by Guy Blaché, who immigrated from France to the United States in 1907 and created her own company, Solax Film, which she owned and operated, first in Flushing, N.Y., and then in Fort Lee, New Jersey, from 1910 to 1914. She is known to have made at least 300 films – comedies, westerns, romances, crime stories, Biblical epics, shorts and features, of which, over the last ten years, some 80 have been found and many restored.