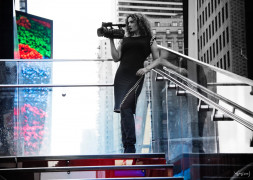 As an actress, she has worked twice with Spike Lee: in Summer of Sam opposite Academy Award Winner Mira Sorvino and John Leguizamo, and selected personally by Lee himself for the principal role in his irreverent Finlandia Vodka spot with Tony Gilroy in his Julia Roberts-starrer, Duplicity among innumerable others. Lucia was most recently seen in guest star roles in the award-winning American drama series, Switch, with Academy Award Winner, Olympia Dukakis, created by fellow NYWIFT member, Stavroula Toska, as well as in the bilingual Italian comedy, Untraditional opposite Italian star and series creator, Fabio Volo, on Italy's popular Nove channel, Comedy Central, and MTV Italy.

Other Countries Worked In
Wales