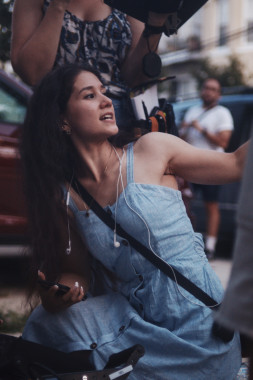 Screenwriter - Director
Born in Uzbekistan and raised in Russia, Alia Azamat Ashkenazi is a published Poet turned Award-Winning Filmmaker. Writer and Film Director with over 10 years experience, Alia also works as a Script Supervisor on narrative and commercial projects.
Full Bio
Alia Azamat Ashkenazi was born in Tashkent, Uzbekistan and raised in Moscow, Russia by her paternal grandmother, Soviet journalist and activist, Rano Abduraimova. Alia was heavily involved in drama and literature club in high school and graduated as an Honors student and Valedictorian.

Alia s father Azamat Abduraimov is an international soccer star and a Champion of 1994 Asian Games. Alia's paternal grandfather Berador is the best Uzbek Goal Scorer of the 20th century, also considered the greatest football player in the history of Uzbek football. Born into a dynasty of elite athletes, Alia herself played junior tennis competitively and now is a vocal fitness aficionado.

Alia started her career in 2006 as a Sports Columnist in Otechestvenny Futbol magazine and a Social contributor for the Russian national newspaper, Uchitelskaya Gazeta. Alia'd achieved an impressive journalistic career for her very young age only to realize that her true love and her true talent lay in dramatic writing and visual story