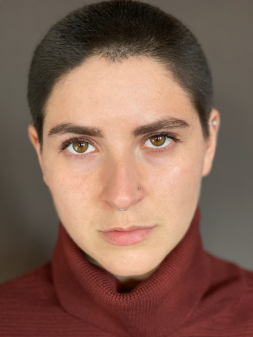 Actor & Co-Founder
Besties Make Movies
Full Bio
I was born in Russia and came over to the states with my fam as Jewish Refugees when I was 6. We touched down in Coney Island and never left NYC again. I act & model. Keeping my acting skills sharp is a cornerstone for me so I study at The Studio Act under the direction of Brad Calcaterra on an ongoing basis. It's important for me to use my voice to advocate for intersectional feminism, self love, equality, sustainability, animals, and queer voices. If you believe in these things as well, follow me on social media, I'm all over the place

After trying on several work-wife relationships I met my other 1/2 Stacey Maltin and we gave birth to the production company Besties Make Movies.

Working on It (digital series) - Actress/Creator/Producer

You're The Pest (digital series) - Co-Producer

Nominated for Best Actress for Slice at Brooklyn Web Fest.