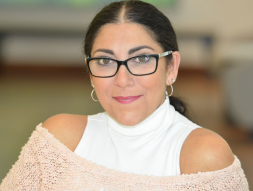 Producer
Shake the Tree Productions, LLC
Full Bio
Toni grew up in Rhode Island with her proud Italian American heritage playing a part in many facets of her life. Maintaining strong family ties, this only child has been cultivating her imagination since age 7 when she decided to entertain her family by recording a fictional talk show voicing ALL seven characters herself. Thus, her acting career is comprised of over 20 years of credits in theater, studio and independent films, television, commercials, industrials and voiceovers. Commercially, she has been seen as the face of iShares and the US Army and heard as the voice of Fidelity, Crestor, Humira, Walmart, Mylicon, Cumberland Farms and Publix Market, to name a few. Her theatrical credits include TV shows Law & Order SVU, The Blacklist, The Mysteries of Laura, Taxi Brooklyn, Blue Bloods, The Following and Nurse Jackie and feature films Nasty Baby with Kristen Wiig, Alto with Diana DeGarmo and Annabella Sciorra, Where God Left His Shoes with John Leguizamo and Riding In Cars With Boys with Drew Barrymore, am

Producer - The B & B Diaries - TV Pilot - Shake The Tree Productions