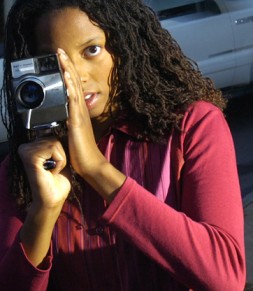 24 frame video playback technician, VTR, VTR Assistant, Video Utility, video assist
Agile Images
Full Bio
Rehema Imani Trimiew, 40, graduated from Bryn Mawr College in 2000 with a BA in Psychology. She began working as a freelance web designer but after some years began her MFA at Rochester Institute of Technology to pursue filmmaking. After winning numerous awards with her short Sticks Stones , a narrative on racial discrimination in the public education system, Rehema directed a documentary on teenage girls in her documentary classes. After filming and shooting her thesis Learning to Fly in Zambia, she graduated from RIT with her MFA, and began working in NYC. She currently works as a videographer and photographer for MTA Capital Construction but continues to freelance. As a camera operator, she recently completed a 2 year oral history documentary with the Montclair Historical Society. Rehema strives to make films that will raise cultural awareness.

Industry Awards
For my photography I won the 2014 Image of the Year cover of ENR magazine:

For my student film Sticks and Stones I won:

Other Countries Worked In
Ghana, Zambia