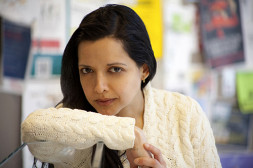 (She/Her)
Director/DOP/Editor
Cinemaluz
Luz Marina Zamora is a Venezuelan documentary filmmaker based in New York. Luz's short De Colores premiered at Doc NYC'17, and it was around the country in several film festivals. Now, Luz is working in a sequel called The Return/El Retorno. sequel called The Return/El Retorno.
Full Bio
Luz Zamora received a BA in Mass Communication with a specialization in audiovisual in her home country, Venezuela. She moved to Los Angeles to collaborate in documentary features, and subsequently to New York after being awarded a merit-based scholarship and admitted to The New School where she completed a Graduate Certificate in Documentary Studies and an MS in Digital Communications Media/Multimedia.

Luz was awarded an Honorable Mention in the Caracas Filminuto Film Festival in Venezuela with her short Caracas Fenced, and her next short De Colores premiered at DOC NYC in New York City, and it was part of the official selection of several film festivals in Los Angeles, Colorado and New Orleans. As a filmmaker, Luz has collaborated for prestigious organizations like The New School, Columbia University, New York Foundation for the Arts, Global Fund for Women, Women Peace and Security, and The United Nations.

Other Countries Worked In
Venezuela, Colombia.