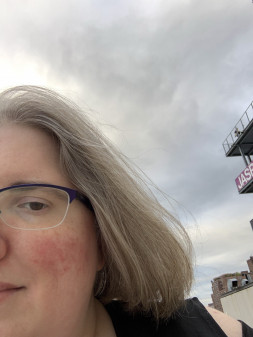 (She/Her)
Executive Producer
Ride the Omnibus Inc.
Horror and documentary writer/director, producer and podcaster on social justice projects
Full Bio
Ariel Baska is an openly disabled horror and documentary filmmaker. As a former teacher, she is deeply interested in film's potential to shape the future. She recently completed her horror short about medical gaslighting, Our First Priority, which she wrote, directed, and successfully Kickstarted. She is also in production on a documentary series about medical bias, White Coat Syndrome. Additionally, she is attached as producer on three projects - Mike Mignola-Drawing Monsters, a documentary about the creator of Hellboy, Latasha Harlins, a biopic of a noted social activist, and Liftoff, an animated feature from Signing Animation, a studio of D/deaf and hearing impaired animators.

She is the founder, co-host and executive producer of Ride the Omnibus, a podcast parked at the intersection of pop culture and social justice. She writes about disability representation for her column in Ghouls Magazine, where she regularly contributes film reviews and analysis. Her comic book analysis and criticism can be f

Mike Mignola - Drawing Monsters - Documentary about the creator of Hellboy