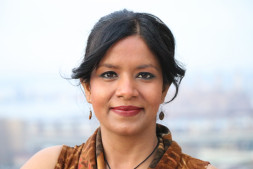 Director/Writer/President
Tired and Beatup Productions
Swati Srivastava is a 1st generation immigrant Indian-American writer/director that is making films that cross boundaries.
Full Bio
Swati arrived in the U.S. as a software engineer but with dreams to be a film-maker. After a long wait for her Green card, she switched careers. Swati has since written and directed several short films, short documentaries, and music videos. Her short films have played at numerous film festivals and won several awards.

As a documentary film-maker, Swati traveled to India to document the epidemic of farmer suicides. Part of that documentary was aired on CNN- India where it was watched by millions and subsequently won their most important story of the year award.

Swati is also an avid environmentalist. She lives with her husband in a Net-Zero Energy house in NY that has been covered by various media including NBC, for its unique features.

Swati is currently working on two features, one an emotional drama called Both Sides Now based on true events that deals with grief & the restorative power of human connection. Her other feature is a romantic comedy with Indian characters living in America pursuing t