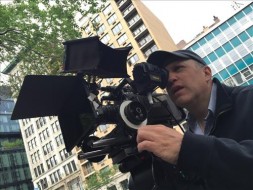 Frankston directed the short film Celebrity Party, a four-minute fantasy featuring celebrity look-alikes.
Produced and Directed credits include:
DV Short What's Your Dish?, and two child acted films, My Butterflies, and ‘Spencer’s World of Pets’, both of which have screened at Film Festivals across the country.
Recent producer credit for ‘Living with Ghosts,’ a documentary about supernatural experience grief training.

Frankston was Nominated for best I-documentary at the Pixie Awards for short documentary, Just Into Girls, which was the winner of the $10,000 Grand Prize award from EVEO.com pre-launch contest.

A specialist in street interviews, Frankston has extensive experience in documentary camera work.

Frankston holds a BFA in Film and Television from New York University's Tisch School of the Arts.

Other Countries Worked In
Bermuda

Crew Up Survey
Willing To Travel: Yes
Has Own Equipment: Yes
Has Insurance: Yes