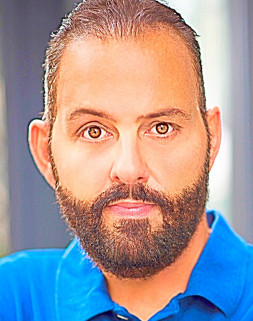 Executive producer, writer, actor and filmmaker
Fiat Lux Pictures and Film Studios, Inc. dba Fiat Lux Studios
Full Bio
George Zouvelos, is an award winning actor, producer and filmmaker. George is American born, a native New Yorker of Hellenic-Greek decent. In addition to his multiple accent capabilities, varying looks, and acting studies, he offers realistic and genuine performances for each role. His real-life experiences on the New York City streets, in law enforcement and public service, have proven to make him a truly idiosyncratic, and a versatile talent that maintains a unique understanding of human nature and human interaction as he successfully reflects same on the stage and screen.

George, operated undercover for nearly a decade as part of a federal public corruption sting, whereas unbeknownst to all, he was depicted in the most unique real-life acting role of a lifetime. He portrayed a controversial (armed with unflattering stories planted in the press) bondsman and bounty hunter. In that dangerous role, George successfully led teams to search, and apprehend dangerous absconders, and other fugitives fleeing just

Other Countries Worked In
United States