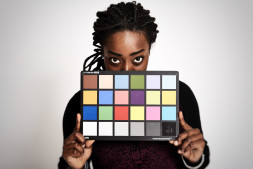 (She/Her)
Director & Cinematographer
Tiesha “Ty” Adams is a storyteller with the pursuit of sharing her ideas, experience, and perspective through film, reflecting moments in the lives of people who resemble her.
Full Bio
Tiesha "Ty" Adams is a Director, Writer, & Director of Photography for commercial branded content, narrative works, and much more. But above all, she is a storyteller. Born, raised & based in New York City, Ty fell in love with the world of film and video production. She has built herself up from the ground, learning the trade from working on sets such as the 2015 musical drama short, Start-Up.com, the 2017 TV series, Soul Kings, and Spike Lee's 2017 reboot, She's Gotta Have It as well as his 2021 HBO Documentary NYC Epicenters 9/11→2021½.

Having recently DPed inclusive projects for brands such as Jordan, Meta, & Ray Bans, Ty continues to strive towards having not only her voice heard, but other black voices around the world.

With a troubled childhood of being bullied and feeling unwanted because of her skin's deep brown tones, she became voiceless. However, creative writing became her voice, and that same skilled passion for writing became the backbone of her filmmaking journey.

For over a decade no

Editor
We Are Mermaids
Completed
2015

Countries Worked In
Antigua and Barbuda

Other Countries Worked In
France // Mexico