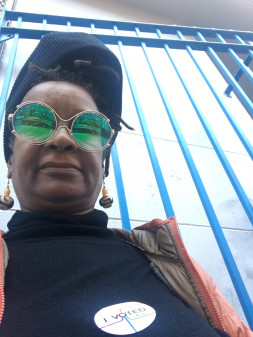 (She/Her)
Editor-Director-Line Producer
Ndolo Films,llc
Editor, director and producer who works in fiction and documentaryand enjoys collaborating with filmmakers from across the globe.
Full Bio
Born in France, Véronique N. Doumbé was raised in Cameroon, France and Ivory
Coast. She wears multiple hats as editor, director and producer. She works in fiction
and documentary. She enjoys collaborating with filmmakers from across the globe.
She is a co-founder of the Paris based Collectif des Cinéastes Non Alignées (CCNA), a
member of the Barcelona Documentary Club (BncDoclub), the Documentary
Association of Europe (DAE). She serves on the Steering Committee of The Anti-
Racism TaskForce for European Film (ARTEF). She also a member of Film Fatales,
The D-word, Brown Girls Doc Mafia (BGDM), and the Black Documentary Collective
(BDC).
Véronique N. Doumbé served on the Board of Directors of New York Women in Film
and Television (NYWIFT-Membership, 2009-2012).
Movies she recently worked on
As an Editor:
- The Inner Wound Real directed by Carrie Hawks (documentary – US 2022)
- Maya and her lover directed by Nicole Sylvester (feature-US-2021)
- There All Along-Women of Trinidad and Tobago directed

Merit Award at the 2009 Accolade Competition

Crew Up Survey
Willing To Travel: Yes
Has Own Equipment: Yes
Other Languages: Yes