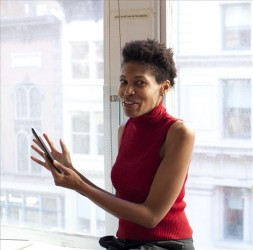 association for women in New York City. She coordinated over 100

panels, screenings and receptions during her six years with the