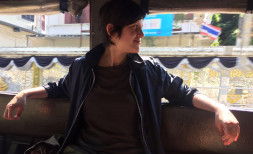 Freelance Producer/Screenwriter
Magenta Nights
Full Bio
NoÎl is an NYC-based producer born in Toluca, Mexico, raised in Silver Spring, Maryland. She is an alum of NYU s Tisch School of the Arts for drama and theater and Berlinale Talents for producing and screenwriting.

She began her career working below the line across different NYC Film & TV productions, before moving in-house to TV sales and development at FremantleMedia International, and then to operations at the film company Cinereach.

She is a producer on Robbie Lemieux s feature film, Fester, a selection for Frontieres 2021, and the forthcoming short film/proof of concept, Open (The Non-Monogamists) an official selection for Los Angeles Latinx Film Festival and a finalist for NYFA s NYC Women s Fund. Open is currently a second-round contender for the 2021 Sundance Episodic Lab. She is also developing the feature film, Bloodyburg, and TV series, Colorcast, among other projects. She runs a Film & TV writer s collective out of Brooklyn, NY.