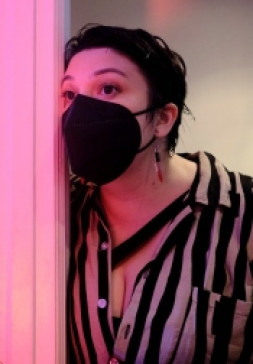 (She/Her)
Assistant Director / Director
Non-Union Assistant Director in NYC! I also have directed music videos, and am in post-production on a documentary I directed/produced. Available as a 1st AD for indie and commercial projects. Available as an AD PA on DGA projects.
Full Bio
katherine filaseta is a queer female filmmaker based in NYC. While most of her work has been as an assistant director, when she is in the director's chair herself, katherine enjoys exploring the way every different type of art combines via film to tell stories - especially stories from marginalized points of view.

She is currently working with singer/songwriter Megn Buckley to direct music videos to accompany her latest Trump-era album about community struggles and women's empowerment. katherine is also in post-production on a documentary, Carol and I, about the way the loss of control brought about by dementia transformed her grandmother's relationship with both her family and herself.

In the past, katherine has directed three episodes of Black Panties, a web series celebrating the beauty and intuition of Black women in all their forms, as well as a PSA about street harassment reappropriating Gnarls Barkley's Crazy from the point of view of a woman walking down the street. Outside of film, katherine sp