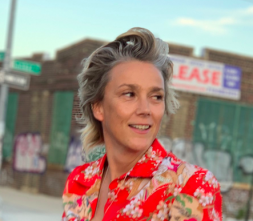 Director (Documentaries)
Bureau NY
Full Bio
In the past 15 years, I have become experienced in directing and producing documentary series and television programs for European national Broadcasters. We won several prestigious Dutch prizes for our documentary series and one of the highlights of my career was making the 35-episode travel documentary series 'The Beagle, in the footsteps of Charles Darwin for which we sailed the world on a three mast sailing ship, exploring the future of species.

Creating stories from start to finish, research, filming, editing, is what I enjoy most. I am known and well respected for my unbeatable energy and creative input. Colleagues have described me as a passionate, dedicated and driven yet flexible professional with lots of experience working with different cultures all over the world.√Ω

Director 'How Great it Was' Documentary 2014

Content Producer THE BEAGLE, on the Origin of Species VPRO 2008-2010 35 episode travel documentary series on Charles Darwin, Around the world

'De TEGEL' for the production on Charles Darwin, the Beagle.

Audience Choice Award for documentary How Great it Was