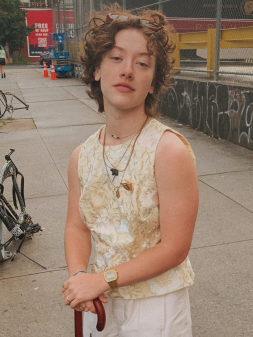 (They/Them)
Video Editor & Marketing Manager
Freelance & Bushwick Film Festival
Seeley Björkstén is a filmmaker and digital artist who is most interested in telling impactful, nonfiction stories through film; they regularly incorporate animation and other forms of unconventional creativity into their work.
Full Bio
Seeley Björkstén is a student filmmaker and digital artist based in New York City. They are most interested in telling impactful, nonfiction stories through film and regularly incorporate animation and unconventional creativity into their work. Their short films WHO I WASN’T and LEVITICUS have won several awards at film festivals around the world.
​
Björkstén consistently qualifies for the Dean's List at American University where they study anthropology and film. They studied abroad in Durban, South Africa in high school and spent the Spring 2022 semester in Prague, studying at one of the oldest film schools in the world, FAMU.

Seeley currently manages marketing and social media for the Bushwick Film Festival. Additionally, their work can be found at visiblemag.com and riseagainsthate.org.
​
As someone who believes art has the power to change society for the better, Björkstén aims to use all their creations for activism.