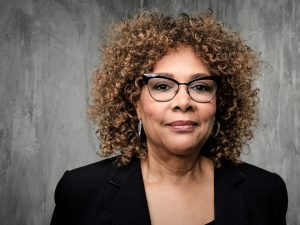 Illusions is a drama set in 1942, a year after the bombing of Pearl Harbor, and takes place at the fictitious National Studios in Hollywood. In the story, a light-skinned black studio executive, Mignon Dupree, risks having her racial identity revealed when she hires a black singer to record a movie soundtrack, replacing one made by the film’s white starlet. United by race, the two black women form a bond and support one another.

From her innovative short works to her critically-acclaimed feature debut, Daughters of the Dust,a drama about different generations of South Carolina islanders, the films of Julie Dash have broken new cinematic ground and redefined black women’s images on screen. As the director of Daughters of the Dust,Dash became the first African-American woman to have a full-length general theatrical release in the United States. Her work as a film director includes Brothers of the Borderland and the NAACP Image Award-winning The Rosa Parks Story.