A Vow From the Ruins

A Vow From the Ruins is an intimate portrait of Setsuko Thurlow, a passionate, 85 year-old woman who survived the atomic bomb in Hiroshima. It is told through the lens of her growing friendship with a second generation survivor, Mitchie Takeuchi. Setsuko was miraculously pulled out of a fiery building after the bomb was dropped and unable to save her 27 other classmates who were burned to death alive. That experience shaped her life forever as she endeavored to keep a pledge she made to her friends – that no one should ever again experience the same horrible fate. The film follows Setsuko Thurlow as an activist and educator through the decades up to the current moment when she might finally realize her dream of a Nuclear Weapons Ban Treaty. 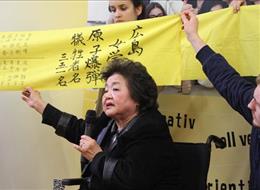 As a powerful and inspiring speaker, Setsuko has become one of the leading voices for ICAN (International Campaign to Abolish Nuclear Weapons). ICAN just won the 2017 Nobel Peace Prize. She has spent her adult life testifying about her experience when the bomb was dropped, and the suffering she witnessed to advocate for nuclear disarmament. But she’s more than just a survivor: she’s been a dedicated wife, mother, social worker, leader, and friend – a woman who has done it all, and will not stop moving forward.