NYWIFT member Olga Slobodchikova works as an assistant editor on major documentary projects for HBO, Netflix and Amazon. Her most recent credits include first assistant editor and researcher of the high-profile Jigsaw Productions project Agents of Chaos (HBO), about Russian interference in the U.S. election.

Olga was born in Russia and worked there as a journalist for the BBC before coming to New York to focus on documentary film. Olga also produced a short film, Age of No Fear, about teenage activists protesting Russian president Vladimir Putin. 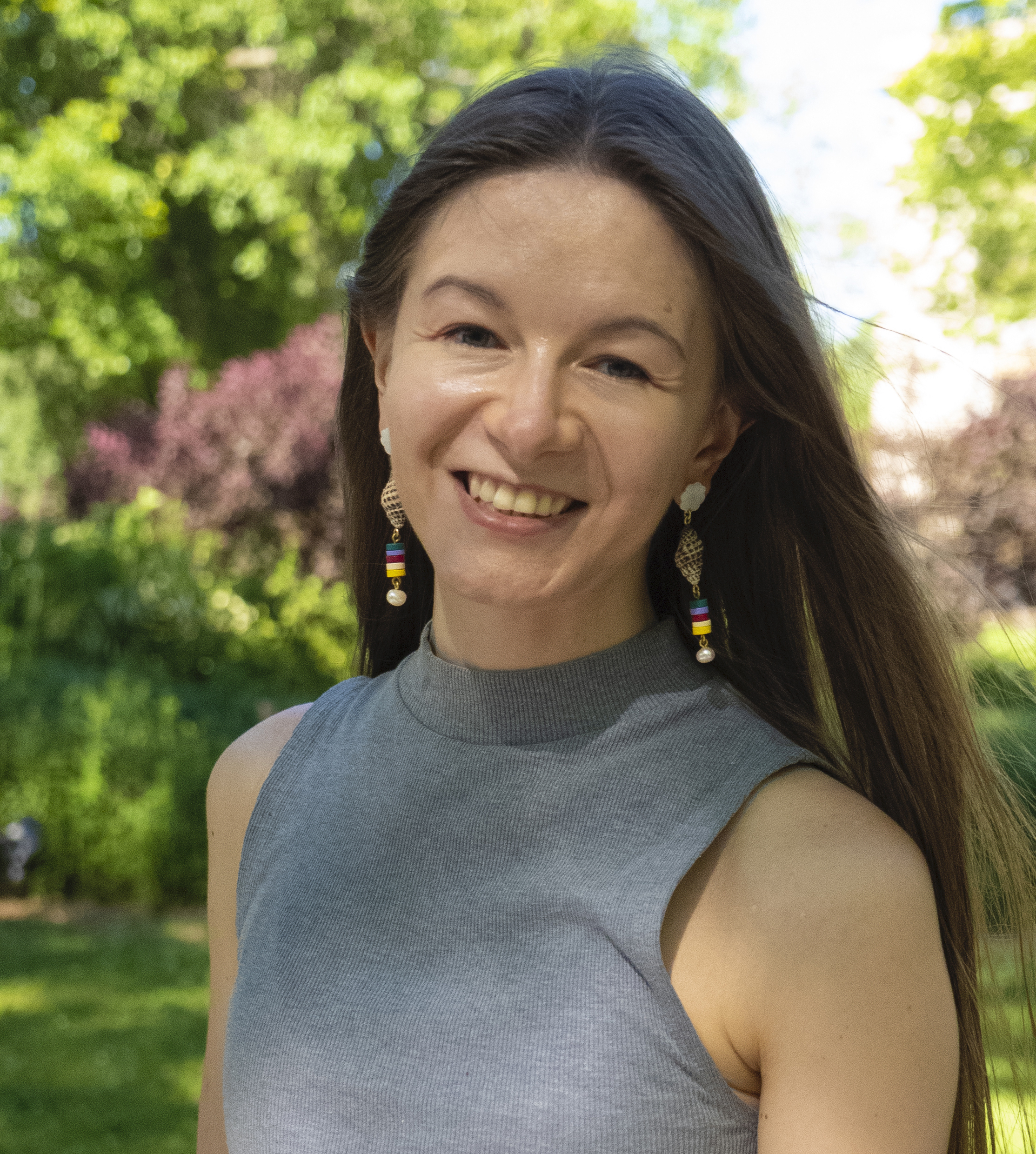 How do you approach your work as an assistant editor and researcher?

As an assistant editor (AE), my first goal is to be well-organized since the technical side of post-production is my main responsibility. It’s essential to be on the same page with the editor and know what their plan and priorities are. This way, I can meet their needs better. Since in documentaries so much of the writing process starts in the editing room, an assistant editor can also end up playing an important creative role in the film.

Even though my main job is that of AE, I often do archival research as well. It helps that my background is in journalism – I used to work for the BBC in Moscow. My understanding of Russia’s politics were very useful in the last four years. I worked on several projects that used Russian-language interviews and archive. On Agents of Chaos, I spent a lot of time researching the infamous St. Petersburg troll factory, from its early propaganda aimed at Russians to their 2016 campaign. Early on, they’d post messages like, “Putin is good,” but they’ve learned to be a lot more subtle over the years. I spent many days going through the social media of people who worked there because they voluntarily posted a lot of evidence. I tend to get a little bit obsessed with research if I’m really interested, and eventually come across exciting things. 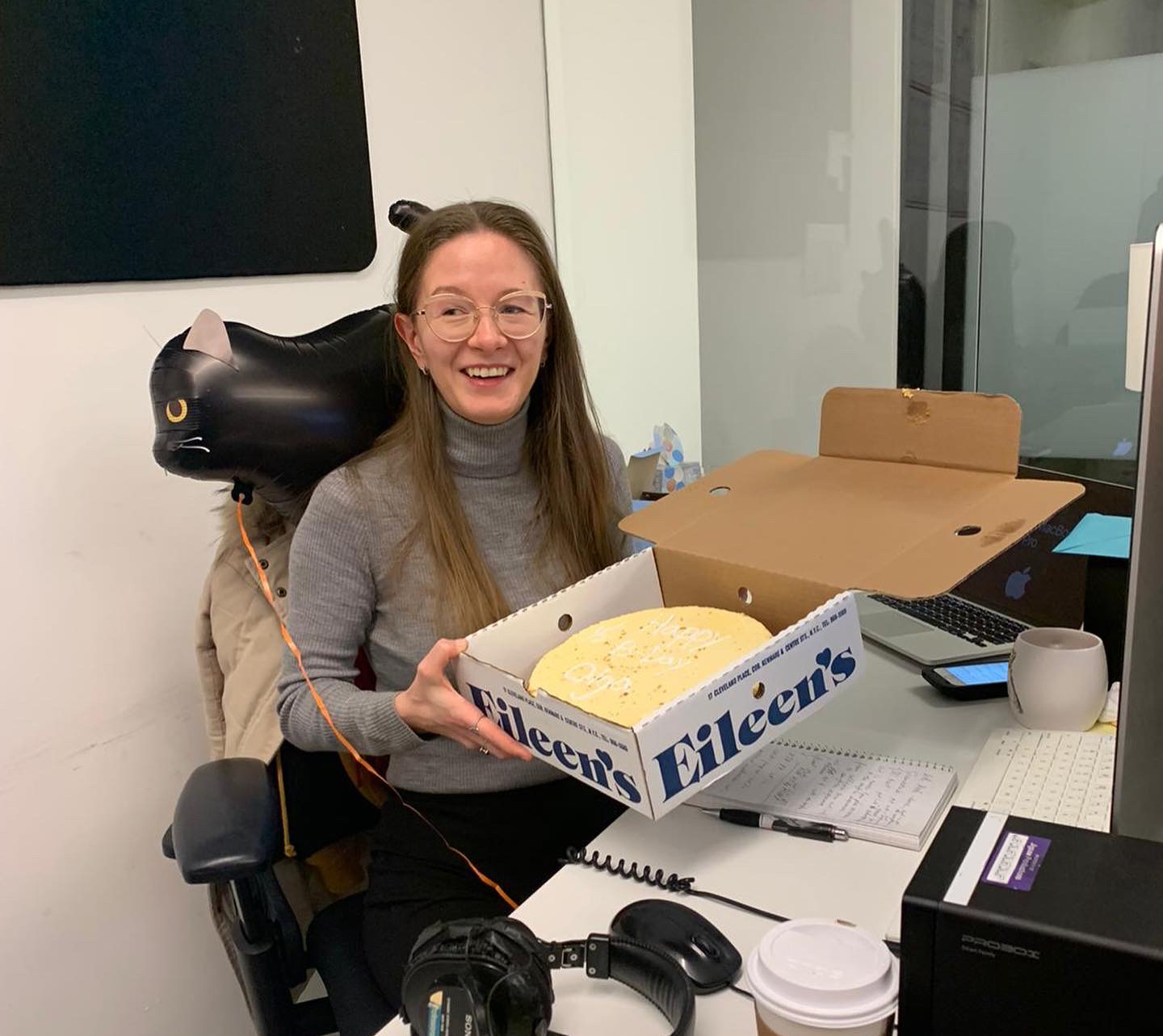 What are some of your favorite tools – any software, office supplies, etc that help you get you through your day?

As an AE, I use the Terminal app a lot. If you install Homebrew, it allows you to run a lot of scripts, such as rsync used to back up files. For repetitive tasks, I line up a whole paragraph of commands, save them and then copy and paste them into Terminal whenever I need them.

I also often get huge batches of archival photos in random order, so I use a script to extract their metadata and sort them chronologically in a spreadsheet. I then rename them in the Automator. Once imported, they’re already in the right order, saving me hours of sorting them manually. I am always happy to share my tricks.

You’ve traveled all over the world for your work. What goes in your “business trip” toolkit?

When it comes to reporting trips, it all starts with functional clothes. The same pair of REI pants has been with me to the jungle in Cambodia and protests in Russia. 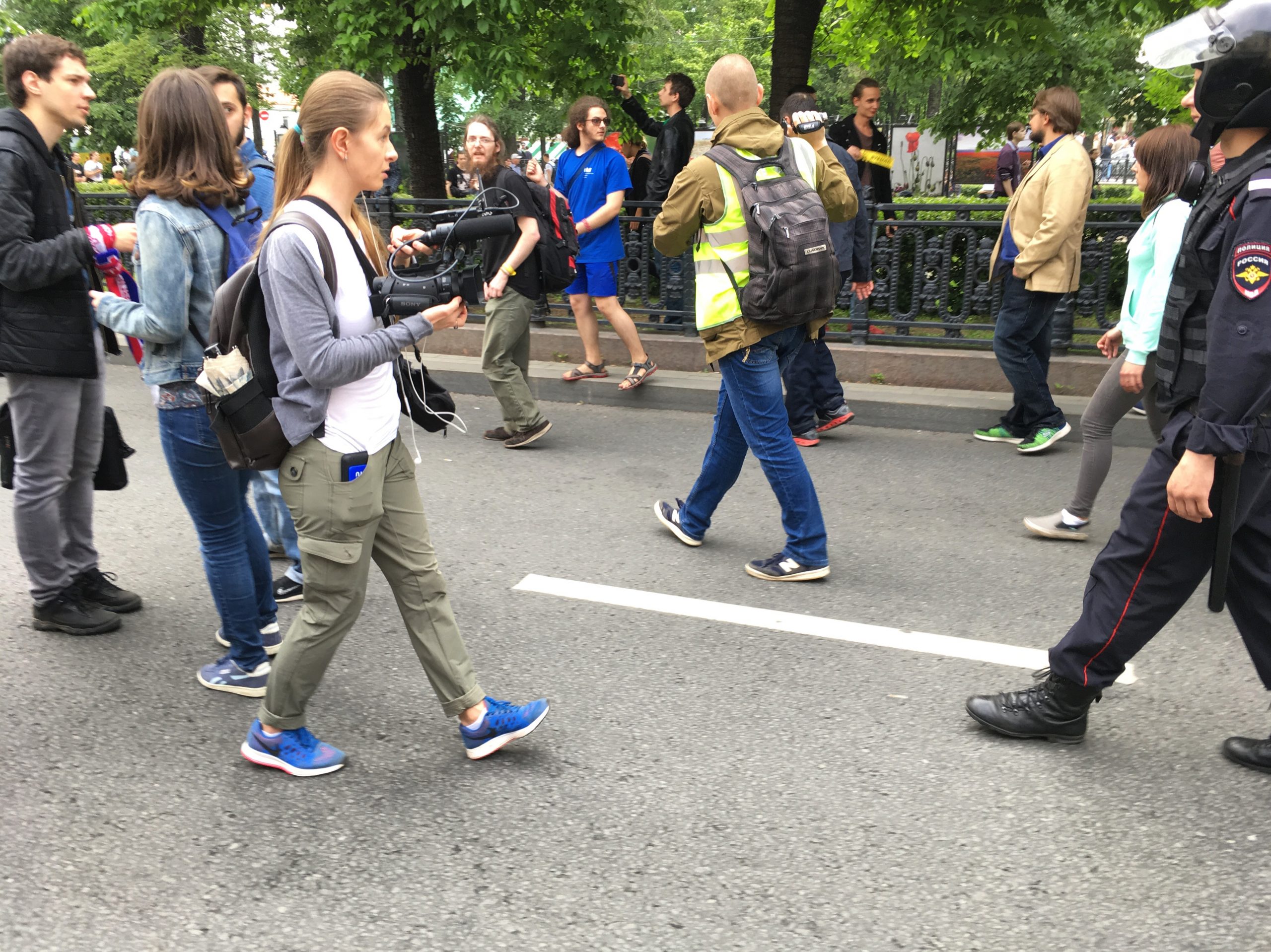 Filming protests in Russia for Age of No Fear

What are the most important stories you have covered?

I covered the protests in Russia, starting from large demonstrations in 2011-2012. The protest movement picked up again in 2017. Around that time, I started working on a short documentary about Russian teenagers protesting Vladimir Putin. It’s available on the NYC Media website and on Vimeo. Putin has ruled the country for as long as these activists have been alive, and the fact they’re minors makes them uniquely vulnerable to pressure from the police and their teachers. Seeing how they still find the courage to speak out was very inspiring.

At the BBC, I covered the Russian doping scandal and the sanctions in the aftermath of the Russian annexation of Crimea. I also got to work in Cambodia thanks to NYU’s Global Beat project in 2017. I contributed to the PBS NewsHour story about Cambodian refugees deported from the U.S. for committing felonies. Many get deported to the country they’ve never been to before because they were actually born in refugee camps outside of Cambodia. I also covered an important environmental story in the Prey Lang forest in Northern Cambodia: we did a VR video about deforestation and rampant illegal logging that is going on there. 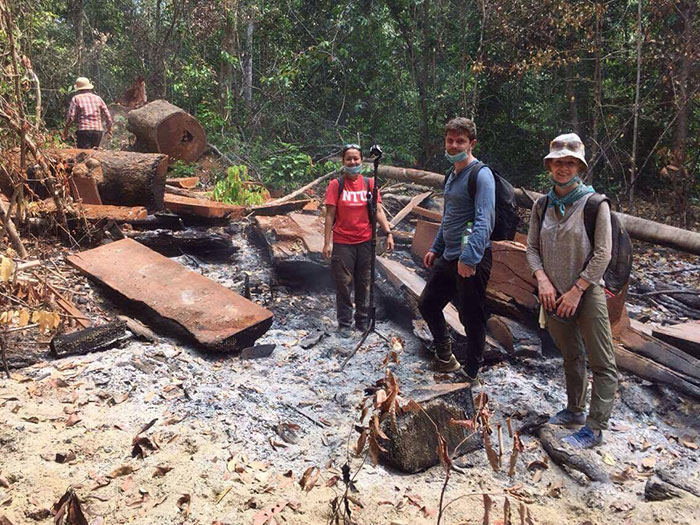 Olga in Cambodia with colleagues Ayesha Shakya and Mathieu Faure

What is your favorite part of working in VR vs. traditional media?

VR has its limitations because the viewer has to use special equipment to have the full experience. But the format works for transporting the viewer into places they are unlikely to visit. In Prey Lang, with my colleagues Ayesha Shakya and Mathieu Faure, we followed a team of locals patrolling the forest. We even managed to catch some illegal loggers on camera. We were in quite extreme conditions: no electricity or running water, sleeping in hammocks.

The basic thing about VR is that it films all around. So you press the button and run away to hide. Once, we were behind some kind of dead, dried out tree. My sleeve brushed against the branches. Next thing I know, there are ants all over me, and they sting! My colleague then said, “You are a true videographer. I’ve never seen anyone panicking so silently. And so aware not to exit the outlines of the tree.”

What did you want to be when you grew up? How has that influenced your career path today?

I started writing short stories when I was about seven or eight and wrote for the school newspaper since I was 12. Journalism was a very natural career choice. At 18, I got my first job with a major news agency in Russia, covering sports. Journalism has always been an essential part of my life. Today, working in the documentary film industry, I still see myself first and foremost as a journalist. 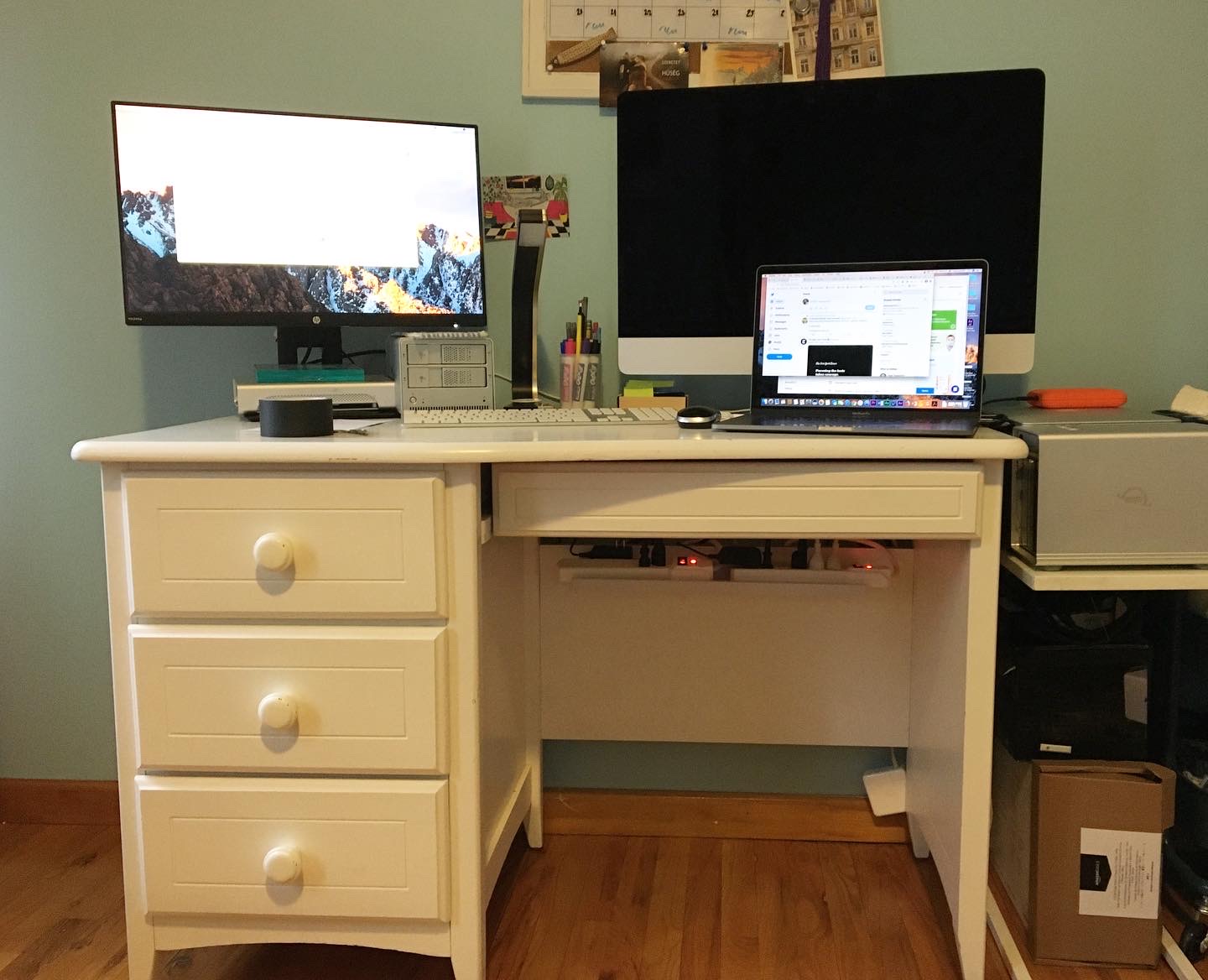 How are you staying sane and continuing to nourish your creativity during covid?

I am incredibly grateful that being in post-production, I could transition to working from home without interruption. That being said, I think it is essential to leave your house at least once a day, even if it’s just for a “sanity walk” around the block.

In terms of creativity, I feel like recently, I’ve been watching a lot of great work of others and absorbing new ideas. I am a member of the International Documentary Association, and recently, I’ve been watching the films nominated for the IDA Awards. During the pandemic, I’ve watched many documentaries that I found inspiring, and I hope to start filming my own side project when the second wave starts dying down in the Spring.