A wise man once said “Imagination means nothing without doing.” And while Charlie Chaplin beat the odds, overcoming painful obstacles in a fledgling industry, for many aspiring filmmakers, it’s easier said than done. Great ideas, even when plentiful, can have a short shelf life when confronted with sobering realities. If you lack name recognition in the industry or practical resources, it’s easy to call it quits.

Not for NYWIFT member Michele Remsen. Her first full-length feature film Toss It,  is a fait accompli. As co-star, producer, director, and screenwriter of an anti-romantic comedy that defies expectations, Michele was the force that made it happen:  in 12 days, on a shoestring budget.

The film peers into the lives of two couples as they stumble through getting hitched and getting on with it – in slow and kaleidoscopic fast takes. After watching the NYWIFT Member Screening of the film earlier this month, Michele and I discussed the backstory and technical nuances. 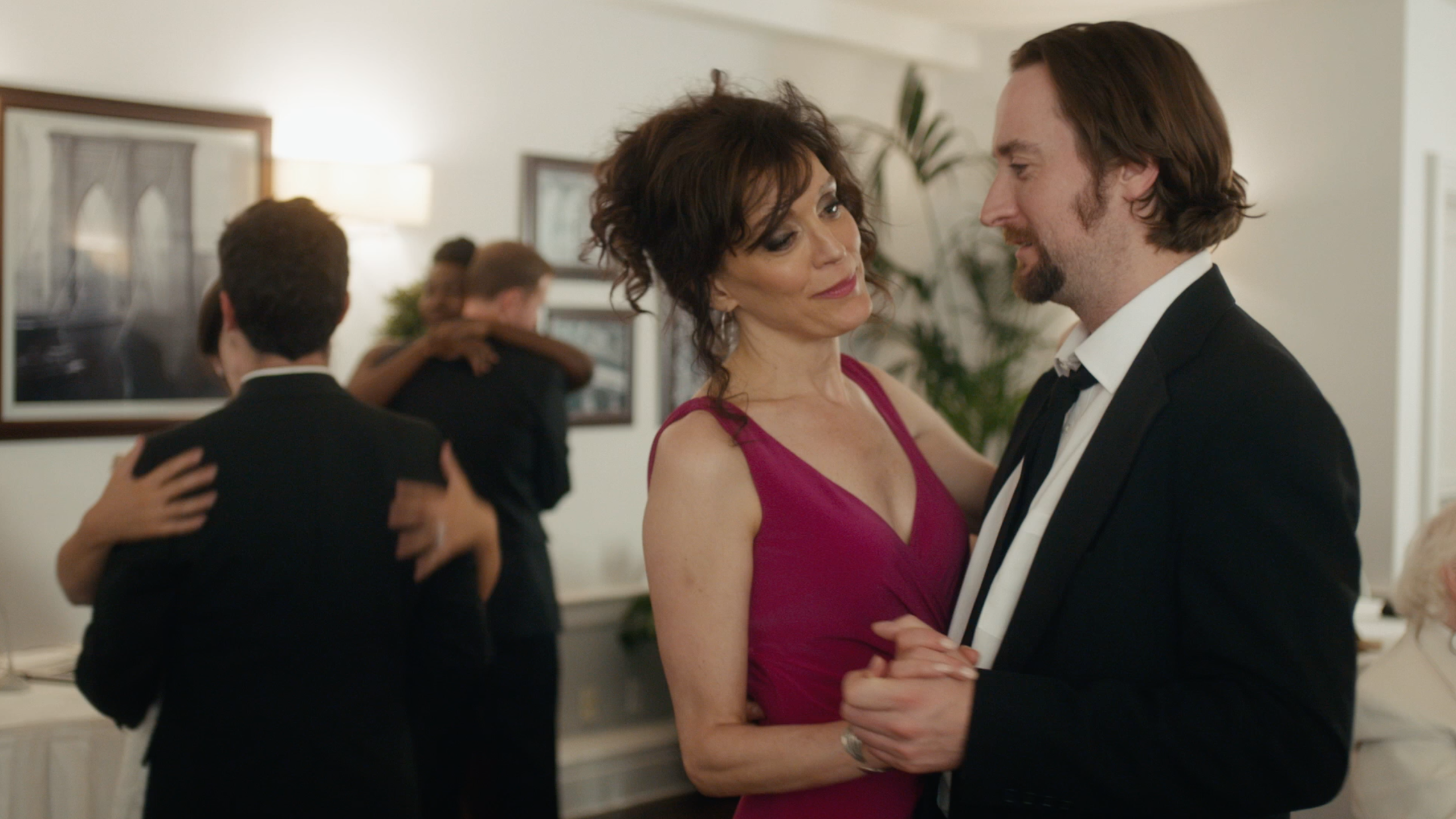 Longtime friends Emily (Michele Remsen) and Finn (Phil Burke) dance at the wedding that opens the film Toss It.

What inspired this movie?

Early screwball comedies, romantic comedies, The Philadelphia Story, fairy tales which taught women what romance was supposed to look like; Toss It looks at reality.

I studied acting, but am self-taught in other disciplines via directing plays and reading books on writing screenplays. Indie filmmakers in LA were also very helpful.  Toss It began as a short play which evolved into a [feature-length] screenplay. Although this was my first feature movie, I had several award-winning short films to my credit.

What were the laundry list of things you had to do as producer and director? Selecting the cast and locations, negotiating fees, choosing wardrobe, etc?

All of the above. I selected the cast; [co-lead] Phil Burke joined last minute through a casting director when another actor had to drop out, but many of the other actors were people I knew from theatre groups. They were paid on SAG’s Ultra Low Budget contract. To make things easier for all and less expensive, we shot exclusively in New York at locations I selected. I chose most outfits from the actors’ own wardrobes, and only rented and bought a few costumes. Digital equipment makes it less expensive to make a film, but I still  had to knock on lots of doors for deals and favors.

How did you finance this and manage to shoot in 12 days on a tight budget?

Preparation and scheduling. I raised $ 150,000 through crowdfunding via Fractured Atlas whose 501(c)(3) status gave donors a tax-deduction. I walked through locations ahead of time with the DP [George Barnes]. The DP and film editor were seasoned professionals. 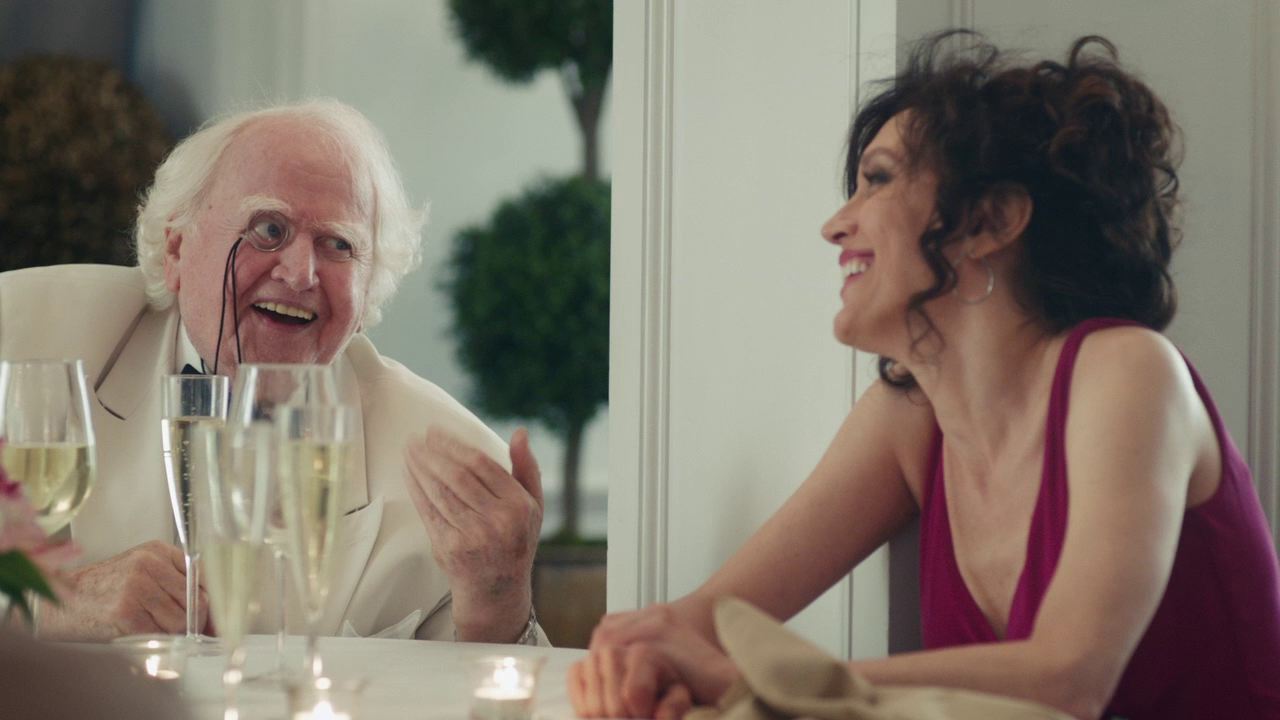 Uncle Claude (Malachy McCourt) flirts with Emily (Michele Remsen) at the wedding in the opening sequence of Toss It.

What decisions did you regret? What turned out well?

Originally this was to be shot in three weeks, not two, to fit the DP’s schedule. Unfortunately, I had to cut parts of the script, including flashbacks to Emily and Finn’s college friendship. I also learned the hard way I could have used a few more hands, more time and more money.

My best decisions were the locations and casting. Filming in NYC hotels worked out thanks to their production values, flexibility to appear like several different locations and a storage closet morphed into a set. My cousin’s house also worked perfectly. My casting decisions turned out well. I’m so proud that I got this done on time, on budget.

You’ve called this movie genre-breaking. How so? This does have a happily-ever-after ending. Both couples get hitched. Emily and Finn work things out, even though it may have seemed unattainable to each.  Adele marries off her sons.

The movie begins where most romantic movies leave off: at a wedding, and it looks like it will end in a standard happy ending. But Hollywood has sold us a lie. People make lots of compromises. Adele, for one, has learned to turn a blind eye to [her husband] Jim’s infidelities but realizes she either has to live with compromises or leave. In some ways, this movie is anti-romance, focusing on the practical day-to-day of relationships. Emily and Finn both have so many doubts. But very bravely, they decide to give it a go. 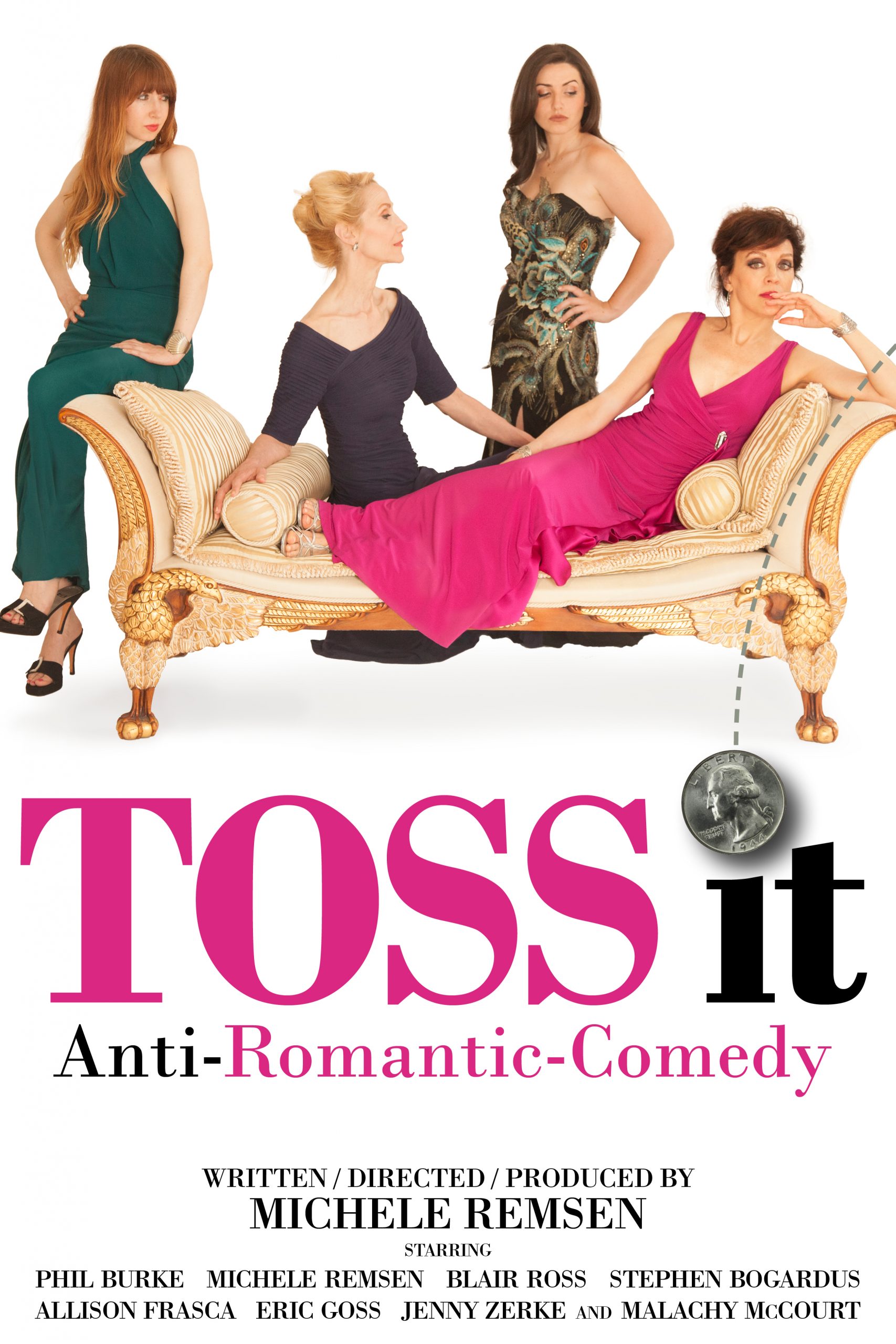 Remsen developed the concept for her female-driven film poster with publicist Annie Jeeves, who also shot the photos.

What are your current projects?

I’m working on several projects, including a topical comedy series.

The film’s marketing and distribution deals are a success story for a first full-length film.  How did that happen?

I hired a publicist with a NYWIFT grant [ed. note: Toss It received the NYWIFT Nancy Malone Marketing and Promotion Grant]. With her help, I landed a two-year worldwide distribution deal after an international sales agent saw the film, liked it and took Toss It to the film markets in Berlin, then Cannes, where a screening and press party lead to international distributors offering me a deal.

Learn more about Toss It.

Artist, animator, and educator Kristin Reiber Harris shares with us what's in her animation toolkit, and how she's staying centered while sheltering in place during COVID-19.

What’s in Your Toolkit: Destiny Lilly

Destiny Lilly is a casting director working across theater, film, and television. While casting is a creative job, it also requires strong admin - lists, databases, and an impeccable memory. Destiny offers a peek inside her casting toolkit.

As a director and producer, NYWIFT board member Kathryn O'Kane is a planner and she's used to solving problems. The biggest challenge she's finding during the COVID-19 crisis is that there’s not enough information to be able to plan. She attended the NYWIFT “Mental Health and Career Sustainability in the Doc World” panel because to learn how producers can come to terms with that and how to relax into the uncertainty of the moment when it goes against our nature. She offers her top takeaways.

What’s in Your Toolkit: Jendra Jarnagin

DP Jendra Jarnagin shares her favorite camera and script notation apps, creative advice, and why networking is the key to surviving in the industry.