New York Women in Film & Television member Misha Calvert is the showrunner, writer and director of the new series All Hail Beth, commissioned by BRIC TV and slated for a Fall 2019 release. All Hail Beth is a modern comedy with an ancient twist; a lonely Iranian-American office assistant wakes up one day and is inexplicably worshipped throughout New York as an ancient Babylonian Goddess. Calvert recently sat down with fellow NYWIFT member Leah Curney for a candid chat about creation, development and dealing with rejection. 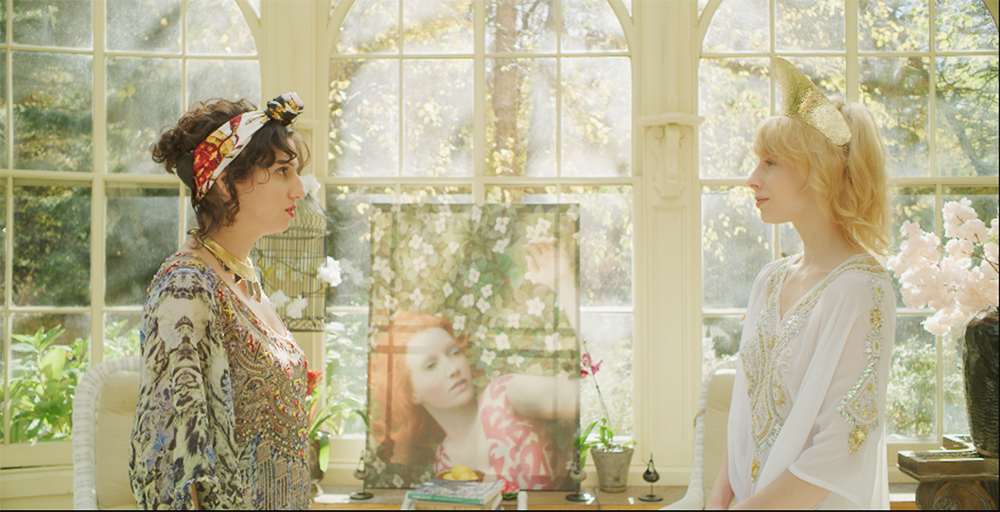 Misha Calvert: I write a lot about power dynamics and gender, and how gender influences power and how power influences our expression of our gender and/or our sexuality. I love stories about empowered women. I thought it was interesting to write about the double-edged sword of power and fame, on a grand scale. It’s hopefully a universally relatable story about what it’s like to go from powerlessness to empowered, and how much that is awesome, but also scary and weird.

The pilot is fantastic and gorgeously shot – how did you do that?

I wanted it to be high color, high-key lighting, a very magical, colorful world. We shot on a RED Helium, which is an 8K camera, so what you’re seeing is the result of A) a really good camera, B) a DP who knows how to use it, and C) a gaffer who has the equipment and knows how to use that. And I don’t want to take away from the production design and the costume design as well. Daniel Ornitz (Production Designer) – met him at Sundance, love that man – he and his team really pulled off miracles.

Thanks. People say that all the time, and I really don’t feel that — all I know is that I work very hard seven days a week and don’t take a lot of time off, and that I want a show on television.

Have festivals been a large part of the development path for your projects?

There’re many different ways to achieve whatever goal you have. Some people are trying to get industry validation, which I didn’t realize until recently was what I was trying to do. When All Hail Beth didn’t get into Tribeca, and didn’t get into South by [Southwest] this year but was in the very last, we’re talking last round, I went into a bit of an existential crisis. I felt that the work was so strong, and the cast was so strong, and to still not get to the place that I thought I was going to get… And then I realized that I was being a selfish pig, that it’s not about me getting validation. I came back to the original idea of trying to connect with an audience. When I’m faced with a rejection, I have to come back to the reason that I’m doing this to begin with, to remind myself to stop thinking of myself, and to think about the people that the show is going to reach, and how do I reach them more and better.

Across the board your projects have incredible marketing. How did you get so savvy?

Well, I worked at a PR firm when I first moved to NY and that was the first time that I really came to understand and respect the press. But there’re different ways to network, too – you don’t need a website, even if all you have as a director is a Vimeo page with some sick clips on it, and then you’re out four nights a week at parties or events, you could easily have a career in Hollywood. It’s all about what are the tools that you enjoy using?

Any networking tips for fellow filmmakers?

Be nice to everybody. Also, be really targeted about who you want to meet. I’ve had network meetings at most of the major networks that do narrative on television. With no agent. Just from honing in on people, and getting psychically specific about who I want to meet.

Any advice for taking those meetings or pitching your projects that you can pass along?

Until you’re pretty all in with them, be seeing other people. It’s just like dating. They don’t want somebody who’s on the edge of their seat, in their face, trying to desperately cram their ideas in. And for your own mental health, it’s great to have as many other meetings lined up as you can. I try to take my pitches in batches so that it’s not like, “Oh, this is my one meeting this month.”

What’s next for you beyond All Hail Beth?

I would love to direct for anyone reading this right now. Now that the series is wrapping, 2019 is the year of directing other people’s projects.

All Hail Beth is slated to premiere on BRIC TV in Fall of 2019. Follow @AllHailBethSeries on Instagram for the latest updates. You can learn more about and connect with Calvert on Instagram @MishaCalvert and at MishaCalvert.com

View all posts by LeahCurney

What’s in Your Toolkit: Grace Kim

NYWIFT is excited to launch our fun new Friday blog series, "What's in Your Toolkit?" where we ask women in the industry about the tools - both literal and figurative - they rely on to get the job done. For our first edition, we caught up with writer/director Grace Kim on the run before her film's screening at the Hamptons International Film Festival.

What can independent producers learn from farmers and bakers? A lot more than you might think, according to NYWIFT member Jane Applegate.

How I Built a Distribution Plan at Film Festivals

NYWIFT member Lara Stolman reflects on her unique path to success with her documentary "Swim Team" - using film festivals to expand her audience and find unique opportunities, even after the film's television debut.