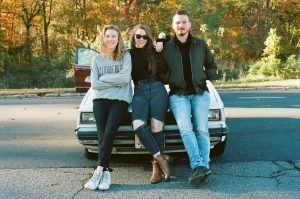 The team behind “Roadhead”

Director, Christa Haley and Executive Producer, Marie O’Connell are young NYWIFT members who are working on a large-scale short film entitled “Roadhead.” The short narrative film is set in the near future after an economic collapse has devastated America. When fuel is scarce, two teenagers named ‘Brooke’ and ‘Weasel’ steal a car and set out to find a better future for themselves. The duo plans to shoot in the vast, dusty lands of Arizona in Fall of 2019.

Christa Haley— Director, Writer, Producer began her career as an assistant to director Derek Cianfrance on the independent feature The Place Beyond the Pines (‘12). She has gone on to work in the editorial department on major feature films including Mary Poppins Returns (‘18), The Girl on the Train (‘16), Oliver Stone’s Snowden (‘16), and Todd Haynes’ Wonderstruck(’17). Christa has directed videos for Vogue Germany featuring Kendall Jenner and world-renowned fashion photographer Patrick Demarchelier. She has edited for brands including Coach, Banana Republic, and Interview Magazine.

Marie O’Connell — Executive Producer, a native of Ireland, began her career in commercial production. After moving to New York, she began working in post-production and has worked on several feature films and television series. Her credits include the upcoming The Red Sea Diving Resort (’19), Barry Levinson’s Emmy-Nominated Paterno (’18), Laurie Simmons’ My Art (’16), HBO’s The Deuce, and STARZ’s The Girlfriend Experience. By working on side projects throughout the years, she developed her passion for producing, and building projects from the ground up.

“Roadhead” has been their passion project five years in the making and currently working tirelessly on funding with their Kickstarter campaign, along with special events with proceeds going towards the film.

“We’re also holding events throughout the campaign to keep growing our audience and to offer something back during funding,” says Executive Producer, Marie O’Connell. “It has been important to us to involve strong women and promote empowerment throughout the entire process by incorporating women-owned companies into the campaign and platforming the amazing network we have fostered along the way.”

$35/person, bring a mat. All proceeds go toward the film.