For the first time in over a decade, both the number and percentage of women working as directors on some of Hollywood’s biggest feature films have increased. In the newest update of the Inclusion in the Director’s Chair Report run by the USC Annenberg Inclusion Initiative and led by Dr. Stacy L. Smith, we see multiple new statistics involving inclusion and diversity that are worth paying attention to. While of course, there are still plenty of strides to be made, the report reminds us to celebrate the accomplishments women have made thus far.

“This is the first time we have seen a shift in hiring practices for female film directors in 13 years,” said Smith. “One notable reason for this jump in 2019 was that Universal Pictures hadf five films with women directors at the helm in the top 100 movies. Yet there is still much more progress needed to reach parity for women behind the camera.”

Over the course of 2019, women such as Greta Gerwig (Little Women), Lorene Scafaria (Hustlers), Olivia Wilde (Booksmart), Lulu Wang (The Farewell) and Melina Matsoukas (Queen and Slim) helped propel the number of female-helmed movies to new heights. Two of the top 10 most successful global releases, Frozen II and Captain Marvel, were co-directed by women (Jennifer Lee and Anna Boden, respectively). 10.6% is a huge jump from 2018 when a meagre 4.5% of the top films were overseen by women.

Smith believes that there are a number of reasons for the improvement. In the wake of the #MeToo Movement and the formation of Time’s Up, studios are facing more public pressure about and greater scrutiny over their hiring practices. At the same time, female filmmakers have been getting more chances to screen their work at prominent festivals, such as Sundance, and have been given more opportunities to work on television and on streaming services such as Netflix. That’s raising their profiles and making it harder for big studios to claim, as they have in the past, that there aren’t as many female filmmakers with the resumes needed to tackle big-budget narrative features.

The female directors of color in the study include Ava Duvernay, Gina Prince-Bythewood, Jennifer Yuh Nelson, Kasi Lemmons, Loveleen Tandan, Melina Matsoukas, Patricia Riggen, Roxann Dawson, Sanaa Hamri, Stella Meghie and Tina Gordon. Keep in mind this is from the top 1,300 films from 2007-2019 — and there are a total of 11 female directors of color. 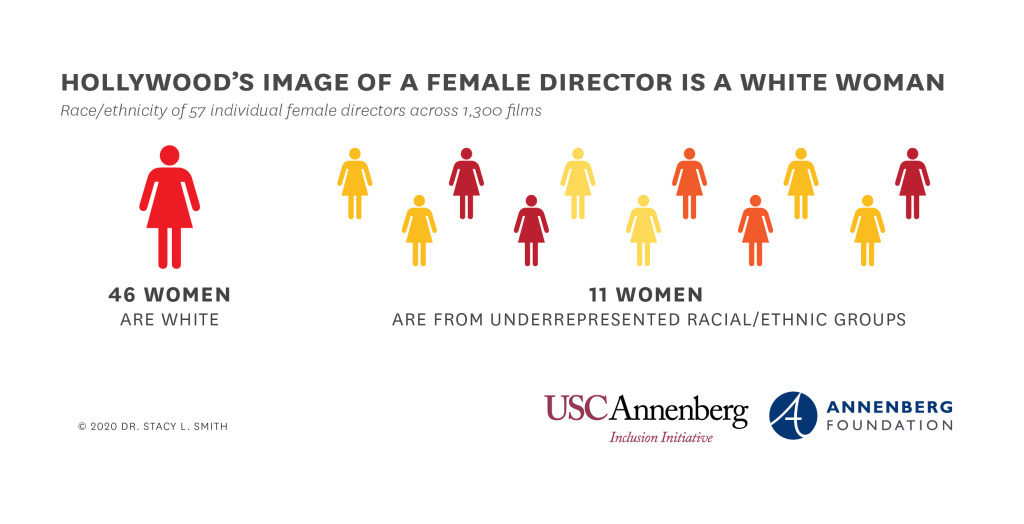 “Women of color received the highest median and average Metacritic scores for their films compared to white male-, underrepresented male-, and white female-directed content,” Smith points out. “Yet, women of color are least likely to work as directors across the top 100 films each year. These findings suggest that when companies seek to hire ‘the best person for the job,’ they are not relying on objective criteria, but on a subjective view of storytellers.”

The next two years should not only see a bigger uptick in women directing the top films, but also a much wider range of faces appearing behind the camera. In 2020 and 2021, female filmmakers will make their most marked foray into popular franchise features ever, especially at Disney and Warner Bros., which have female-directed efforts in both the Marvel Cinematic Universe (Cate Shortland’s Black Widow & Chloe Zhao’s The Eternals,) and the DC Extended Universe (Patty Jenkins’ return to Wonder Woman & Cathy Yan’s Birds of Prey).