The entertainment industry lost a legend this week when actor, producer and director Penny Marshall passed away at the age of 75. And NYWIFT lost a Muse. New York Women in Film & Television honored Marshall with a Muse Award for Vision & Achievement back in 1994, at our 15th Annual Muse Awards, along with actor Lauren Bacall, producer Grace Blake, Film Forum’s Karen Cooper, actor Sally Field, and news anchor Jane Pauley. It was quite the lineup.

Marshall’s NYWIFT honor came just two years after she directed A League of Their Own, arguably one of the best sports films of all-time and an incredible showcase of female empowerment. At that point she was already the first female filmmaker to make a movie grossing over $100 million with 1988’s Big.

Of course, Marshall got her start as a comedic actress, and she brought those comic chops in full force to the Muse Awards stage. We are fortunate enough to have the entire transcript of her acceptance speech in our archives. Take a look back as we celebrate the life of one of our greatest Muses. 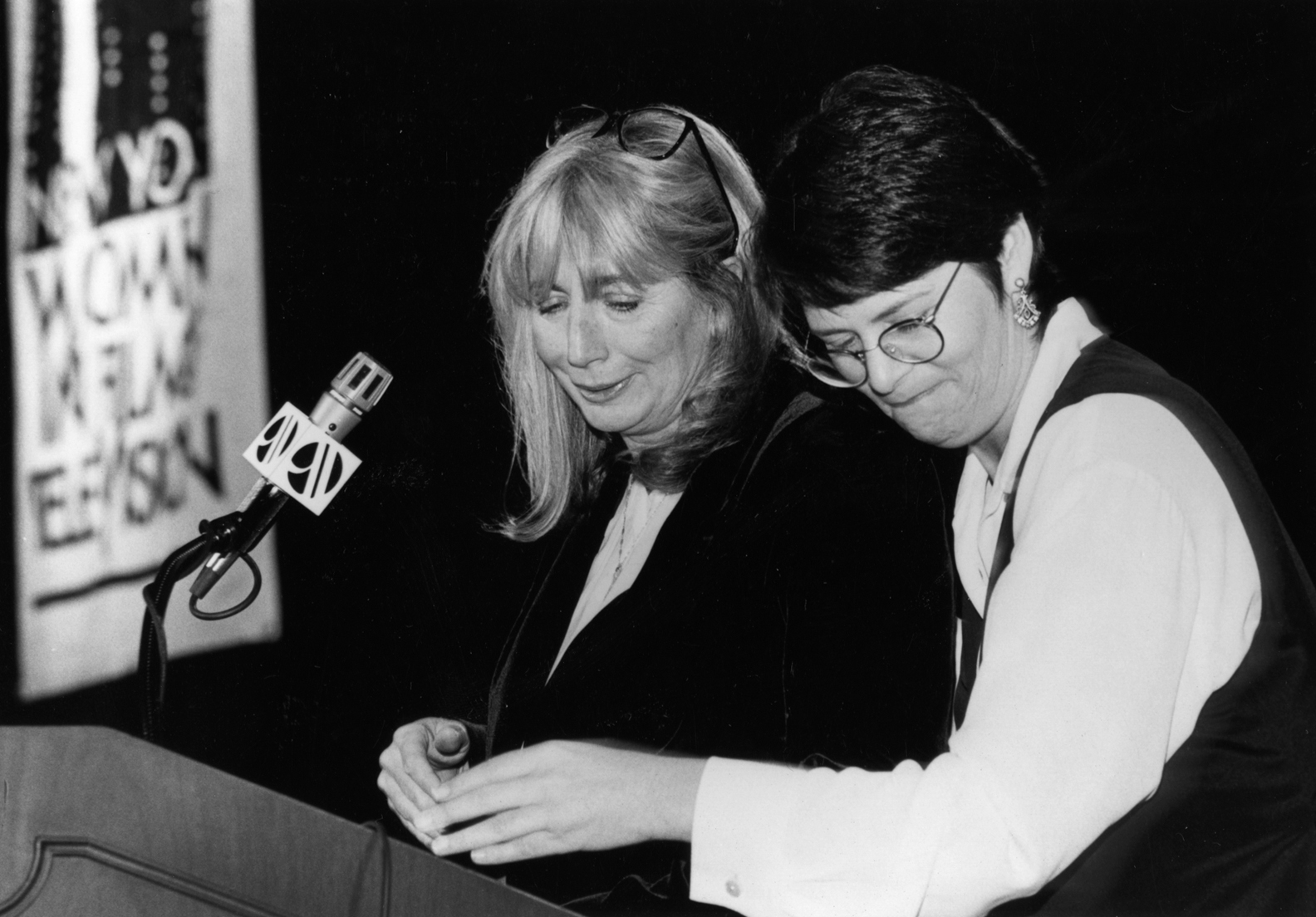 “Thank you. I’m honored to be a 90’s muse and to receive this award along with such a group of talented women. I think the Greeks were pretty lucky to have had nine female muses to inspire their creativity. I’d mention them all by name, but I can’t pronounce them. They didn’t teach me much about muses when I was in school. I did take music, and I did learn to play the autoharp, but that’s another story…

When I tried to think of what female I could consider a muse, I came up blank.

All my life I tried to please her – like you just saw in the film clips. She was a tap dancing teacher who taught classes in the basement of our building in the Bronx, and all she wanted was for one of her kids to be a dancer.

She was always putting on recitals for charity with all the kids in the neighborhood. Me, she had spelling out the word ‘moth’ with my body, while my brother Garry played the drums. For the Bronx in the 50’s, that was show business. When I finally confronted her and told her I really didn’t like dancing and spelling ‘moth’ with my body, she decided to call me he ‘bad seed.’ She had a way with words. And inflections: ‘What, you’re going to wear that shirt? That’s how you’re gonna wear your hair?”

That kind of confidence building was enough to make you want to go away to college – far away. I wound up going to the University of New Mexico in Albuquerque. The reason my mother let me get that far away was she thought it was next to New Jersey, New York and New Hampshire – you know, one of those old New England states.

Instead of graduating, I got married and had a baby, and headed out to California where my brother Garry was writing for The Dick Van Dyke Show. When I got to Hollywood, there weren’t a lot of female muses around. It was mainly a bunch of male muses. So my brother became my first muse.

He said he saw a gleam in my eye when I told him I’d enjoyed playing Ado Annie in a production of Oklahoma in New Mexico, and he encouraged me to start acting.

As the years went on, I contracted other male muses. There was Jim Brooks, Steven Spielberg, Lowell Ganz, Lorne Michaels, Rob Reiner, and any other guy I could get a date with. These guys somehow let it be known I was funny and had talent. They didn’t exactly tell me to do anything with that talent, but it was enough knowing that they thought I could make people laugh.

They would encourage me whenever I got a small part in something. Whereas my mother, on the other hand, would always say, ‘Did they let you dance?’ 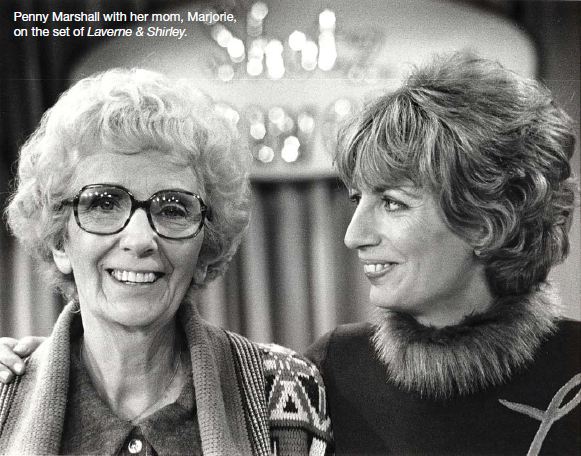 Penny Marshall with her mom, Marjorie, on the set of Laverne & Shirley

In those years, they were beginning to let women star in TV series: The Carol Burnett Show, The Mary Tyler Moore Show, Rhoda, and Phyllis. And when Laverne and Shirley knocked All in the Family out of the number one slot, the male muses weren’t all that happy. Especially one you’ve probably heard of. Still, I was just playing a blue collar gal, who did a lot of silly things, so it wasn’t all that threatening to their white collar status. My mother wasn’t so impressed either. She still wanted to know, ‘Did they let you dance?’

I did the series for eight years. Then I took another three year spell of going around the world with one of the muses I was dating – it was on a motorcycle, but that’s another story…

Then, all of a sudden, I was called in to take over directing a picture. I checked in with the muses, and they said ‘well, you’ve got nothing to lose, and you might learn a lot on the job.’

By this time, the other muses, the male muses, were falling by the wayside. They felt if I could do a movies as successful as Big, I didn’t really need advice. Muses with feet of clay. The fact is you always need someone to give advice, someone to give you perspective. 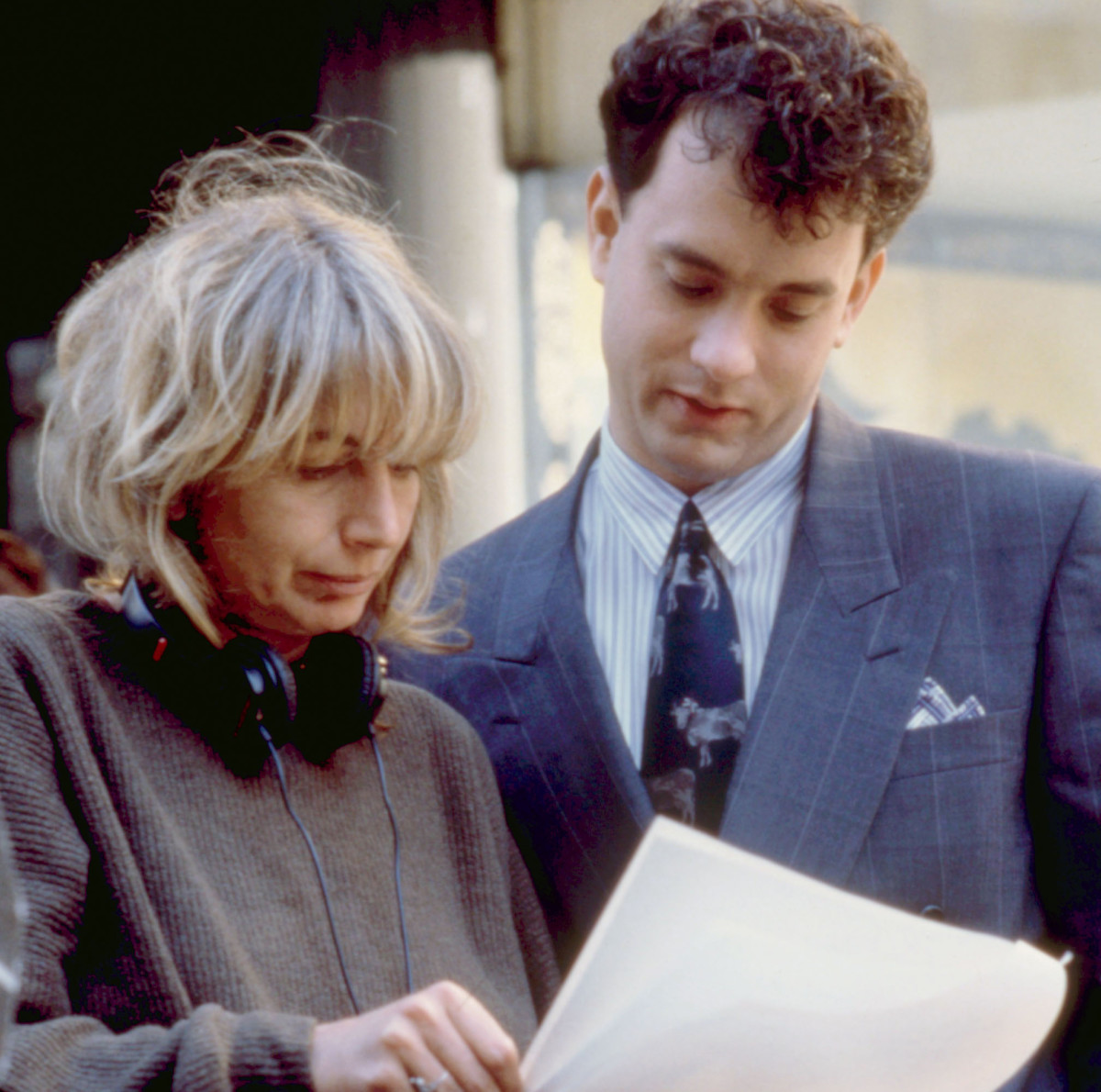 That’s one thing that has changed in this business. Today there are females in Hollywood who can help a younger generation learn the pitfalls, the pluses, and the pressures of being a woman in film.

Now, back to my mother the muse. One of the main things she taught me was don’t be afraid to use your feminine wiles as an asset instead of a liability. She taught me a lot of survival skills as well, but mainly she taught me to have a sense of humor. Now, I’ve probably got this wrong, but I’ve found whining can be a great asset. And I don’t know about the rest of you women here, but I have no compunction about saying ‘I have cramps.’ It scare the bejesus out of most guys I know.

My mother also taught me the power of lying. Which I’d like to pass on to you. I had a blind grandmother. She wore nothing but black and dark brown. But my mother was always buying her these on sale at Alexanders. So there was my grandmother in a shocking pink sweater with leather pants, and my mother saying, ‘Oh, it’s a lovely shade of brown.”’My grandmother happily wore it.

You may think it a little odd, but the same approach can work with actors who need encouragement or studio heads who want to cut your budget. Just pick your favorite scene and say ‘well, I’ll be happy not to shoot it.’ You’d be surprised how quickly they do the scene or give you a few more days to shoot. Imagine Big without the piano scene.

Over the years, I’ve always tried to win my main muse – my mother’s – approval. The fact that I’ve shot two films here in her home town makes me feel a little better, although I still feel I’ve let her down. She passed away a few years ago, but I know if I called her up now and told her about this award, she would ask, ‘Did they let you dance?’

And so as much as I’d like to thank all you people her for giving me this award, [PENNY LOOKS UP TOWARD THE SKY)], here’s a quick one for you, Mom.

[PENNY DOES A LITTLE TAP DANCE AND EXITS]